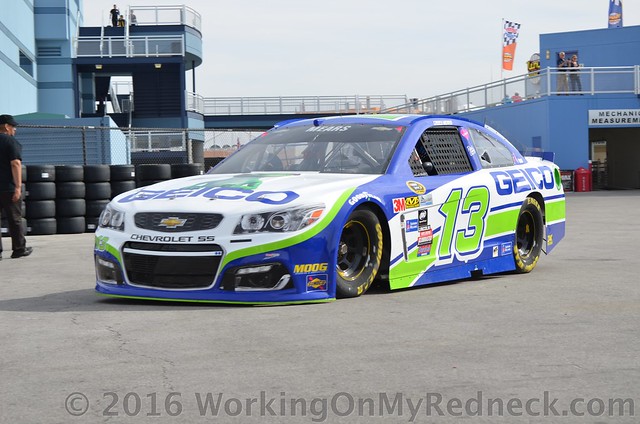 NASCAR Sprint Cup Series driver Casey Mears says he and the Germain Racing No. 13 team are concentrating their efforts only on the remaining five races of 2016 and can’t speak about next year.

“Not at the moment,” Mears said Friday at Talladega Superspeedway. “Right now we’re just focused on what we talked about at the beginning of the season. Focus on the remainder of this year first and foremost.”

Geico, the No. 13 team’s primary sponsor, is signed through 2018. In many cases, sponsor and driver contracts run concurrently.

“As I know more, we can talk about it,” Mears said. “But right now we’re just focused on getting through this weekend.”

The above quote from Mears would indicate that he is out of the driver’s seat at the end of this season and someone else, namely Ty Dillon, will be behind the steering wheel beginning at Daytona 2017!

Remember back when Richard Childress announced that Daniel Hemric was being added to his XFINITY stable of drivers for 2017, there was a couple of important things that Childress mentioned, as well as some thing that he failed to mention! Childress mentioned that in addition to having Daniel Hemric to his NXS stable of drivers, he also stated that Ty Dillon will race “most of the NXS” races in 2017- not all of the races.  That would indcate that if Dillon is not racing all of the NSX races, that he would be driving in the Sprint Cup Series full time with some team, and driving some of the NXS races for RCR.

It now becomes apparent that my speculation that Ty would be driving for Germaine Racing has come full circle and will be announced soon!