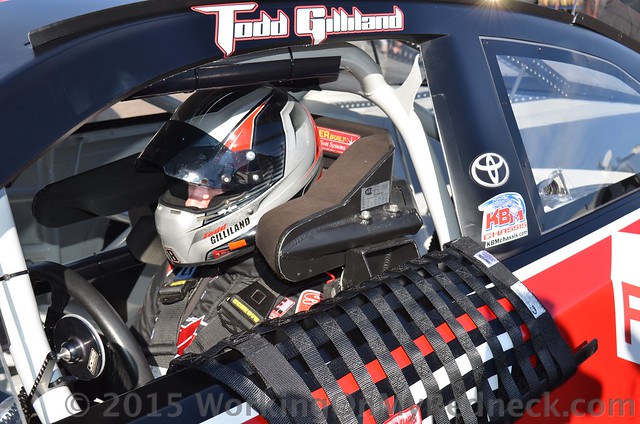 Todd Gilliland started the season with a historic winning streak. Wrapping the season up Saturday night, an eighth-place finish was more than enough for the teenager to add to the record books!

Partridge’s third win of the season in the No. 9 Sunrise Ford/Eibach Springs/Lucas Oil Ford wasn’t enough to catch Gilliland, who won the crown by 13 points over the veteran driver from Rancho Cucamonga, Calif.

In the process, Gilliland became the youngest champion in the history of the NASCAR national or touring series at 16 years, 5 months.

It was just the latest NASCAR historic mark Gilliland matched or eclipsed in his first full season.

Gilliland’s six victories matched the win total posted by Greg Pursley (2011), Brendan Gaughan (2001) and Doug George (1995) as the most in the NASCAR K&N Pro Series West since Jimmy Insolo won nine in 1978.

Gilliland joins Scott Lynch (2003) and Lance Hooper (1996) as the only drivers to win both the Sunoco Rookie of the Year title and the championship in the same year.

Gilliland lost the championship points lead to Partridge halfway through the season after being caught up in a first-lap wreck at Sonoma Raceway and finishing 24th. But he reeled off three straight wins to take the top spot back and he never relinquished it down the stretch.

Partridge was fastest in both practices Saturday morning at All American, and started on the front row after rain washed out qualifying. He dominated the evening’s race, which was delayed several hours because of the weather.
Noah Gragson finished fourth and Nicole Behar fifth.

And Gilliland joined his grandfather as a NASCAR champion. Butch Gilliland won the 1997 West crown, while Todd’s father David had his best series points finish of third in 2009.