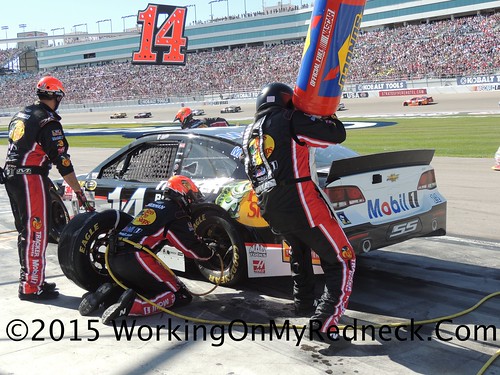 Tony Stewart didn’t earn his 50th career NASCAR Sprint Cup Series victory Sunday in the Hollywood Casino 400 at Kansas Speedway in Kansas City, but he still walked away from the 1.5-mile oval victorious.

In his traditional role as driver, Stewart piloted his No. 14 Code 3 Associates/Mobil 1 Chevrolet to a 16th-place finish at Kansas. And in his dual role as co-owner of Stewart-Haas Racing (SHR) with Haas Automation founder Gene Haas, Stewart watched as their driver, Kevin Harvick, led 74 laps en route to the victory.

It was the 36th points-paying Sprint Cup win for SHR since its inception in 2009 and the organization’s sixth this season. Most importantly, it earned Harvick a guaranteed spot in the next round of the Chase for the NASCAR Sprint Cup.

As the fifth race in the 10-race Chase, Kansas served as the second race in the Round of 12. The original, 16-driver Chase field was whittled down to 12 following the Oct. 2 race at Dover (Del.) International Speedway. The next cutoff race comes Oct. 23 at Talladega (Ala.) Superspeedway, whereupon the Chase field shrinks to eight for the Round of 8. Another three races will be run in that round, where after the Nov. 13 race at Phoenix International Raceway, only four drivers will advance to the final, winner-take-all Championship 4 round Nov. 20 in the season finale at Homestead-Miami Speedway.

After a 38th-place finish at Charlotte (N.C.) Motor Speedway last week, Harvick needed a victory to advance to the next round and not leave his fate up to next week’s outcome in the restrictor-plate race at Talladega. Harvick delivered by securing his 35th career Sprint Cup win, his fourth of the season and his second in 22 career Sprint Cup starts at Kansas.

“It’s just proof that time and time again when you back Kevin Harvick in a corner, he comes out the next week firing and finds a way to get it done,” said Stewart after the race. “Proud of those guys, as always.”

Stewart had a solid race at Kansas. He started 14th in the 40-car field and moved into the top-10 after four laps. By lap 10, the two-time Kansas race winner had climbed to eighth.

“The balance is almost identical to yesterday,” Stewart told crew chief Mike Bugarewicz over the team radio, referencing his car’s handling in the two practice sessions on Saturday. “It’s not too bad.”

After a tire pressure adjustment on the first stop, Stewart slipped by Chase Elliott to claim seventh place.

But as the race continued, Stewart’s progress slowed. His car was harder to turn through the track’s corners and as he fought the car’s balance, he dropped to 16th. Stewart keyed his mic on lap 159 to say his car felt like it was on top of the track.

Stewart and the Code 3 Associates/Mobil 1 team spent the remainder of the race working on the car’s handling, with the crew utilizing each pit stop to adjust the chassis. While it wasn’t enough to climb further into the top-10, it was enough to keep Stewart within sight of the top-10.

When the checkered flag dropped, Stewart finished 16th in his final Sprint Cup race at Kansas.

The three-time Sprint Cup champion is retiring from driving at the end of the season and he concludes his Kansas tenure with two wins, six top-fives and nine top-10s with a total of 164 laps led in 21 career Sprint Cup starts dating back to the track’s inaugural race in 2001.

There were eight caution periods for 38 laps with three drivers failing to finish the 267-lap race.The next event on the Sprint Cup schedule is the Oct. 23 Alabama 500 at Talladega Superspeedway. The race starts at 2 p.m. EDT with live coverage provided by NBCSN.