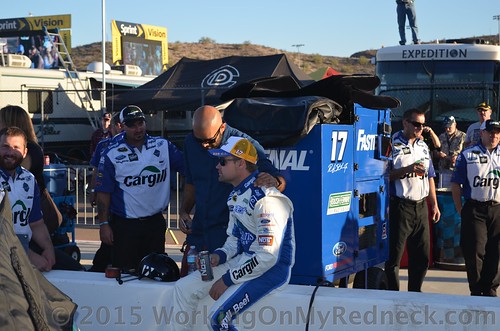 Despite battling an ill-handling race car for a majority of Sunday’s Hollywood Casino 400, Ricky Stenhouse Jr. drove his Fastenal Ford to a 19th-place finish at Kansas Speedway.

“We really struggled this weekend with the balance,” Stenhouse said. “We got lucky with some cautions which got us back on the lead lap but our Fastenal Ford wasn’t consistent on the handling. We have five races remaining to gain the most points we can so we need to make the most of it.”

After scraping the right side of the Fastenal Ford during his first qualifying run in round one, the Olive Branch, Miss. native battled back to advance to round two. Stenhouse started the 267-lap race in the 18th position but lost a few positions early on due to a loose handling machine.

Crew chief Nick Sandler kept the 2013 NASCAR Sprint Cup Series Rookie of the Year out while the leaders were pitting in hopes of a caution before he called the Fastenal Ford to pit-road. The much needed caution was displayed on lap 176 allowing Stenhouse to get one of his laps back to the leaders.

With less than 50 laps, the two-time XFINITY champion took the wave around to get back on the lead lap. When the final green waved setting up a 30-lap shootout, Stenhouse lined up in the 22nd position and was able to gain three positions in the closing laps to take the checkered flag on the lead lap in the 19th position.

Stenhouse and the No. 17 team travel to Talladega Superspeedway next weekend for the Alabama 500. Race coverage will air on Sunday at 2 pm ESTon NBCSN and can also be heard on MRN and SIRIUS radio channel 90.

Kaulig Racing Leans Into Some Cup Racing For ’21