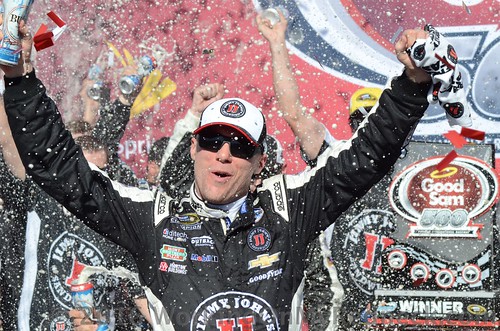 Kevin Harvick, driver of the No. 4 Outback Steakhouse Chevrolet SS for Stewart-Haas Racing (SHR), won Sunday’s Hollywood Casino 400 NASCAR Sprint Cup Series race at Kansas Speedway in Kansas City. Harvick led three times for a total of 74 laps en route to the victory, which is the 35th of his career, his fourth of 2016 and his second at Kansas.

More importantly, however, the win keeps Harvick’s championship aspirations alive as it automatically qualifies him for the Round of 8 in the Chase for the Championship.

“The first thing I want to do is thank everybody on the No. 4 team,” said Harvick, who won a Sprint Cup race at Kansas in October 2013. “Everyone at Stewart-Haas Racing, Busch, Mobil 1, ditech, Outback, Chevrolet, Morton Buildings, Bad Boy Buggies, everybody at the Hendrick engine and chassis shops for everything that they do. These races are so hard to win, and these guys are so good at the details. You put their backs against the wall and they get better. I’m really proud of them.”

A rough outing at Charlotte (N.C.) Motor Speedway one week ago placed Harvick in a precarious position coming into this weekend’s race at Kansas, sitting 12th in the point standings. With next week’s Sprint Cup Series race at Talladega (Ala.) Superspeedway serving as the cutoff event for the Round of 12, Harvick is breathing a huge sigh of relief after this victory, able to roll into the widely acknowledged “wildcard race” with his position in the Round of 8 secure.

“I think the best thing is that we prepare this thing for every race,” Harvick said of his team’s motivation for the Kansas event. “I try every week to find something to motivate myself, and I know these guys do the same thing. It’s hard to keep yourself motivated and continue to perform at a high level. Being able to do it for three years now says a lot about the character of this team and the things that they do. It is like they say, anything that is really, really hard to get and come by, there are going to be some obstacles and some bumps in the road. I am just really proud of everyone at Stewart-Haas Racing.”

While Kansas wasn’t necessarily a must-win, Harvick and the No. 4 team entered the race weekend knowing that winning would be the best way to control their own destiny in the Round of 12. It was a plan that Harvick executed from the drop of the green flag, jumping from his 11th-place starting spot into the top-eight by the time the field completed the first lap. He continued his ascent and was racing in the top-five by the time the first caution was displayed on lap 27.

Throughout the race Harvick reported only minor handling issues. He maintained a presence among the frontrunners, eventually racing his way into the lead for the first time on lap 126. He spent the next 43 laps at the front of the field, but he forfeited the lead when a tight-handling issue developed on the No. 4 Chevy.

The Bakersfield, California, native was in second place for what turned out to be the final restart on lap 237. He quickly wrestled the top spot from race leader Carl Edwards and pulled away as a number of cars started to make a bid for second. The battle for second allowed Harvick to stretch his lead over the closing laps and win by a margin of more than a second.

There were eight caution periods for 38 laps with three drivers failing to finish the 267-lap race around the 1.5-mile oval.

As the fifth race in the 10-race Chase for the NASCAR Sprint Cup, Kansas served as the second race in the Round of 12. The original, 16-driver Chase field was whittled down to 12 following the Oct. 2 race at Dover (Del.) International Speedway. The next cutoff race comes Oct. 23 at Talladega (Ala.) Superspeedway, whereupon the Chase field shrinks to eight for the Round of 8. Another three races will be run in that round, where after the Nov. 13 race at Phoenix International Raceway, only four drivers will advance to the final, winner-take-all Championship Round Nov. 20 in the season finale at Homestead-Miami Speedway.

Busch and Harvick continue to represent SHR in the Chase. Harvick leaves Kansas in second place on the Chase Grid and is locked into the Round of 8 with one win. Busch leaves Kansas sitting sixth on the Chase grid, with a 17-point margin over ninth place.

With one race remaining before the Round of 8 begins, the top-12 drivers competing for the title rank as follows:

The next event on the Sprint Cup schedule is the Oct. 23 Alabama 500 at Talladega Superspeedway. The race starts at 2 p.m. EDT with live coverage provided by NBCSN.