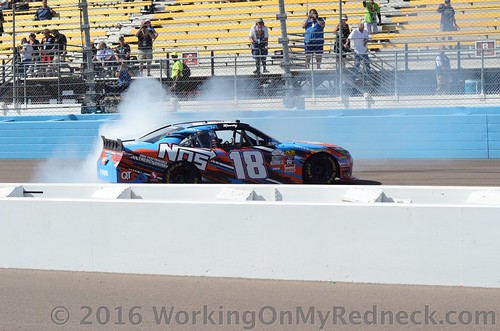 Kyle Busch’s domination of Saturday’s Kansas Lottery 300 at Kansas Speedway was about the only predictable thing that happened in the first race of the Round of 8 in the inaugural NASCAR XFINITY Series Chase.

In winning his fourth XFINITY race at the 1.5-mile track, his ninth of the season and the 85th of his career—extending his own series record—Busch led 150 of 200 laps, passing Joe Gibbs Racing teammate Daniel Suarez after a restart with 13 circuits remaining.

“It was a hard-fought battle,” said Busch, who had surged to a lead of 7.961 seconds before the first caution slowed the field on Lap 57. “Seemed like it was going to be easy for us. We had a super-fast car, and when we were out front, I could take it easy on those long runs and we could drive away.

“The car would turn so well. A lot of things were trying to work against us at the end of the race. We were able to persevere and do the right things and have lucky restarts and be in the right grooves and not get caught up in the melee that was happening.”

Suarez had reason to be elated with his eventual third-place finish. An unexplained “popping” sound in his No. 19 Toyota accompanied a loss of horsepower, and Suarez settled for a hard-won result after Elliott Sadler passed him in the closing laps for the runner-up spot.

Because Suarez led laps and Sadler didn’t, he and Sadler leave Kansas tied for the Chase lead, but Sadler owns the tie-breaker due to higher finishes.

“I’m proud of my race team,” Sadler said. “We just kept working on the car and getting it better and better. I’ve got to do a better job trying to outrun that 18 car (Busch). He’s really good, and he knows how to manipulate the air. But I’ve got to keep trying.”

Blake Koch finished ninth—third among Chase drivers—despite a late flat tire, the adverse effect of which was diminished by a timely caution, one of 10 during the afternoon. Koch is seven points behind the two Chase leaders.

Chaos gobbled up the remaining five Chase contenders. A tap from Brandon Jones turned Chaser Justin Allgaier sideways and ignited a six-car wreck that also eliminated Darrell Wallace Jr., who crashed out in 33rd-place. In a severely damaged car, Allgaier soldiered to a 14th-place result and left Kansas tied with Erik Jones for the final transfer spot into the Championship 4 race at Homestead-Miami Speedway.

Jones ran up front through the vast majority of the race, but his No. 20 Toyota was turned into the Chevrolet of Ty Dillon when NASCAR Sprint Cup Series regular Kyle Larson made an aggressive move after a restart on Lap 183.

Jones pitted with a cut tire and finished one position behind Allgaier, one lap down.

“He (Larson) said it was his fault,” Jones said after talking to Larson on pit road. “He owned up to it, got me ran over. It is what it is… He just said he got a good start and there was no hole there, nowhere to go with the run he had just got into my left rear and turned us. It’s a shame, we both had fast cars.”

Ryan Reed salvaged a 16th-place finish despite a loose plug wire that kept him down on power until his team could troubleshoot the problem on pit road. After contact in heavy traffic on Lap 176, Brendan Gaughan took a wild spin through the infield grass and came home 31st, 18 laps down.

Both Wallace and Gaughan will have yeoman work to do when the Chase resumes at Texas Motor Speedway after a two-week break.

Check out the unofficial results of the Kansas Lottery 300.