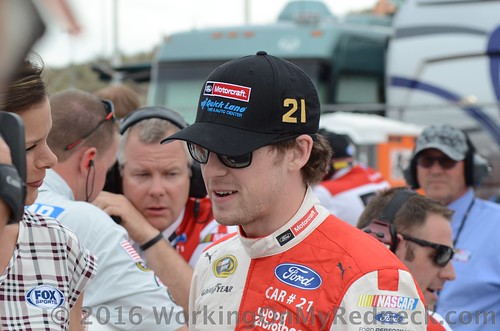 After a disappointing finish at one of their home tracks, Charlotte Motor Speedway, Ryan Blaney and the Motorcraft/Quick Lane team head to one of their happy places, the Kansas Speedway.

For Blaney and crew chief Jeremy Bullins, Kansas is where their Cup careers began back in 2014, when they ran the No. 12 Ford for Team Penske, qualifying 21st and finishing 27th.

Their Kansas races since then have been in the No. 21 Motorcraft/Quick Lane Ford Fusion fielded by the Wood Brothers, and the results have been impressive.

Last fall, Blaney qualified eighth, led five laps and finished seventh. Back in May, he stepped it up a notch, qualifying seventh and finishing fifth.

That progression had Bullins thinking optimistically earlier this week as he oversaw the final preparations on the No. 21 Fusion.

“This should be a fun weekend with the Motorcraft/Quick Lane Ford Fusion,” he said. “Kansas has been a lot of fun for us as a team, and we have a lot of experience and notes to look back through.”

He pointed out that Blaney is adapting well to the 1.5-mile speedway as evidenced by his Kansas driver rating of 85.4, which is 16th on the list and puts him just behind Joey Logano and just ahead of Kyle Busch.

Bullins said that if Blaney’s first Cup race at Kansas wasn’t factored in, he’d be much higher.

“Ryan’s driver rating in the last two races at Kansas would have him in the top 5 on average, so it’s certainly somewhere we feel good about,” he said.

Bullins also said that despite the final outcome in the past two races, where a blown tire at Dover and being collected in a multi-car wreck at Charlotte ruined promising finishes, the Motorcraft/Quick Lane Fusion has had the speed to finish in the top 10 in both races.

“We’ve had fast cars for several weeks now, and the last two weeks haven’t ended like we wanted so I know everyone is ready to bounce back strong this week,” he said. “I feel like there’s no better place for us to get back in a good rhythm to finish off the season than Kansas Speedway.”

Qualifying for the Hollywood Casino 400 is set for Friday at 6:15 p.m. and the race is scheduled to start just after 2 p.m. Sunday with TV coverage on NBC.