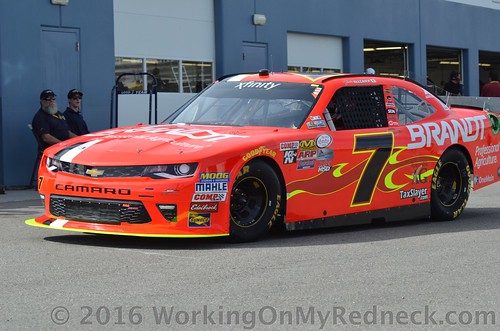 “It is awesome to be a part of round two in the NASCAR Xfinity Series Chase. We have a lot of momentum right now and we’re taking one my favorite cars this weekend. I’m really proud of Kevin (Meendering, crew chief) and our team. We’re all clicking.

“I really hated missing the race last week at Charlotte, but you can’t fight Mother Nature. We qualified well at Kansas in the Truck, and finished seventh, so I have a good feeling for the track, and we just raced at Chicagoland last month, which is very similar to Kansas. It will be a good chance for us to go out and get some solid experience and get ready for the run to the finish in the NASCAR Camping World Truck Series. The JR Motorsports cars have been fast on the bigger tracks and hopefully we can add to that this weekend.”

“After being repaved a few years ago, Kansas has become one of the more fun mile-and-a-half tracks on the circuit. It’s transitioning between having a lot of grip, but also the character you need to really be able to move around and race side by side. Kansas City is a great area and we have a lot of awesome fans there. I’m excited to get back to the mid-west and kick off the next round of the Chase.”

“It’s going to be a lot of fun getting back in the No. 88 Fire Alarm Services Chevy with JR Motorsports at Kansas. We didn’t quite have the finish we were looking for last time out at Bristol, so this is another opportunity for us to get to Victory Lane with the folks from Fire Alarm. JRM’s mile-and-a-half program has been stout this season and I know that Dave (Elenz, crew chief) and the guys back at the shop will bring a strong piece to the track this and it’s a lot of fun to drive these fast cars.