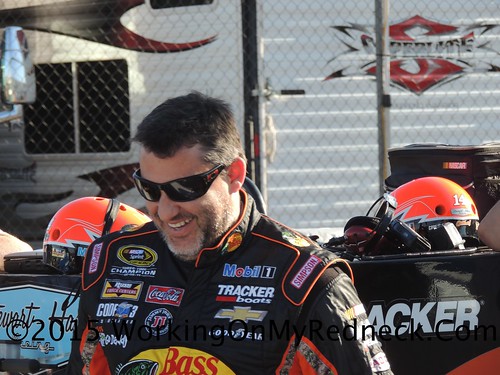 Safe to say a good many race fans didn’t expect the kind of performance turned in by Tony Stewart during the 2016 season. He’d announced last year that his 18th season in the NASCAR Sprint Cup Series would be his final one before he devoted the rest of his career to team ownership and short-track racing across America.

After two frustrating seasons, conventional wisdom opined Stewart’s NASCAR swan song would be a nice story to occupy media before NASCAR’s late-season Chase for the Sprint Cup playoffs began. Competitors and crew would reminisce with Stewart throughout the year about his three championships and 48 victories while tracks would present him with rocking chairs or other parting gifts each week.

Expectations might have been further tempered January when Stewart suffered a burst fracture of the L1 vertebra in a Jan. 31 all-terrain-vehicle accident.

As Ty Dillon and Brian Vickers substituted for him, even Stewart, who attended all but one of the races while injured, said he didn’t know when 45-year-old bones would heal. Many speculated the point deficit from the missed races would be tough to surmount. Plus, he’d have to win a race – which he hadn’t done since June 2, 2013 at Dover (Del.) International Speedway – if he had any hope for making the Chase for the first time since 2012.

But Stewart climbed back in the No. 14 April 24 at Richmond (Va.) International Raceway and drove like he’d never missed time. Throughout the spring, Stewart ran well and started running better and better as the temperatures warmed. In June, he earned his 49th career victory by making a thrilling, last-lap pass at Sonoma (Calif.) International Raceway to end an 84-race winless drought. In the following months, Stewart began posting top-five finishes and top-10s on a regular basis. It was enough to secure a Chase berth few predicted could have been possible given the obstacles faced in 2016 by Stewart and his team led by rookie crew chief Mike Bugarewicz.

Stewart’s hopes for advancing to the Chase’s Round of 12 fell just 11 points short at Dover earlier this month and it appeared – some assumed – the team and Stewart could now cruise through the last few races of a glorious career and call it a season at the sport’s finale at Homestead-Miami Speedway in Florida. But, to anyone who closely watched last Sunday’s 500-mile race at Charlotte (N.C.) Motor Speedway, it was obvious Stewart and his team are doing everything they can to secure a 13th-place finish in the season standings.

Despite barely cracking the top-20 in practice at Charlotte Thursday, Stewart qualified fifth. On race day, he dropped to midpack when a speeding penalty relegated him to 31st and a lap behind the leaders. It would have been an easy out to cite bad luck and cruise the rest of the way before finishing a lap down and striking another event off the ever-shrinking list of races left in his career.

Instead, Stewart and Bugarewicz kept working to improve the car and the No. 14 slowly crept up the scoring pylon before finally returning to the lead lap with just 82 laps left in the race. Stewart raced hard in the final laps despite gambling on a fuel conservation strategy that didn’t pan out when a caution flew with 25 laps to go. Over the final laps, Stewart wrung everything out of his car and crossed the finish line in ninth place for his eighth top-10 finish in 22 races since returning from injury in April.

Not the race report of a driver or crew counting the days until Homestead.

This weekend, with just six races left in his Sprint Cup career, Stewart makes his final appearance at Kansas Speedway in Kansas City, where he’ll drive the No. 14 Code 3 Associates/Mobil 1 Chevrolet for his Stewart-Haas Racing (SHR) team. The 1.5-mile Kansas oval has been kind to Stewart, who owns two wins, six top-five finishes and nine top-10s and has led a total of 164 laps in his 20 career Sprint Cup starts there.

In May, Stewart led 12 laps at Kansas on his way to a 12th-place finish, making him one of the drivers with a chance to visit victory lane this weekend. If anyone doubts Stewart can win at Kansas or capture that coveted 50th career victory before the end of the season, they can just take a look at how often the doubters of Tony Stewart have been wrong in 2016.