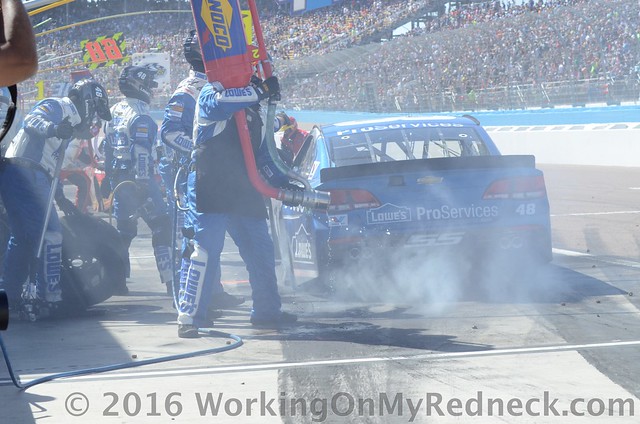 After Sunday’s victory at Charlotte Motor Speedway, Jimmie Johnson can proclaim justifiably “The Boys are Back in Town.”

But for five other Chase for the NASCAR Sprint Cup drivers, all of whom finished 30th or worse in the rain-delayed Bank of America 500, the race ended in a medley of dire straits.

Taking the lead from Matt Kenseth after a restart on Lap 317 of 334, Johnson pulled away to win by 1.474 seconds over the driver of the No. 20 Joe Gibbs Racing Toyota. Johnson put his No. 48 Chevrolet in Victory Lane for the third time this season, the eighth time at Charlotte – the third since the repaving of the track in March 2006 – and the 78th time in his career.

The real prize for the six-time champion, however, was a guaranteed berth in the Chase’s Round of 8 and the accompanying stress-free trip to Talladega two weeks hence.

“That is massive,” said Johnson, who led 155 laps in breaking a 23-race winless streak, the longest of his career. “I’m so happy about that. So happy to be in Victory Lane with this guy, with Chad Knaus (crew chief).

“We’re a brotherhood on this No. 48 team, and just so thankful for the friendship and the hard work. Same thing for everybody at Hendrick Motorsports. We’re really going to enjoy this.”

And no doubt Johnson’s automatic advancement to the next round certainly will enliven the talk of a record-tying seventh title.

Logano blew a right front tire on Lap 117 to cause the third caution of the race. On Lap 155, he sustained severe damage from hard contact with the outside wall, lost 78 laps in the garage for repairs and finished 36th.

“One was the left front and one was the right front, from what I hear,” Logano said after his second wreck. “Once you hit the wall once, it kind of throws the front-end geometry out of line, and that’s probably what screwed up the second one for all I know.

“Who knows? I know it hurts a lot when you hit the wall that hard, but I’m glad I’m all right… We had a fast car. Our car was capable of winning the race. We drove up from 10th and were up to third and running down the leaders, so I felt really good about what we had. I don’t know. Things happen. It’s part of racing, I guess.”

Right before Logano’s No. 22 Ford hit the wall, Harvick’s No. 4 Stewart-Haas Racing Chevrolet lost power. Harvick retired in 38th place, and spoke to reporters while his crew was still trying to diagnosed the engine problem that killed the car.

“It just suddenly shut off, and the things that it points to are no oil pressure,” Harvick said. “It’s definitely not a power issue with the battery or anything like that. They’re trying to diagnosis it.

“I hate it for everybody on our Busch team. They made some great adjustments today and got our car back where we needed to be to run up front, and everything was going fine. Lots of things can go wrong, and today they did.”

But misery loves company, and on Lap 259, a 12-car pile-up ended the race for Chasers Austin Dillon and Chase Elliott. Trying to push Dillon’s No. 3 Chevrolet, which had taken two tires to gain track position, Martin Truex Jr. tapped the bumper off-center to the right, turning Dillon’s car into the infield wall.

“I tried to give him a shove,” an apologetic Truex said on his radio. “I just turned him around like a damn idiot.”

Dillon felt the contact and was immediately out of control.

“I’m fine,” Dillon said after exiting the infield care center. “It just sucks. We’ll have to work hard the next two weeks to get the points back. I felt like I got to third gear pretty clean, and then the next thing – I feel contact, and I’m spinning through the grass.

“It’s part of it, and we took two tires there and you know the risk when you get into it. You just hope that doesn’t happen, obviously. I got to third without spinning the tires, and I felt like we got contacted. We’ll just go on to next week.”

As Dillon spun, Elliott checked up behind him – and right in front of Kyle Busch, who couldn’t avoid contact and turned Elliott’s No. 24 Chevrolet into the outside wall. Busch’s car was damaged, but held together with pop rivets and Bear Bond, his No. 18 Toyota salvaged a sixth-place finish.

Elliott wasn’t as lucky. The Sunoco Rookie of the Year leader retired in 33rd place.

“We had such a good car, and I’m devastated that we didn’t get the result that the guys deserved,” said Elliott, who had led 103 laps before the accident. “They gave me such a fast 3M Chevy and that’s all you can ask for. We just have got to go and do more of that next week (at Kansas).”

Hamlin was running second when his engine exploded with 26 laps left. The mechanical failure relegated the driver of the No. 11 Joe Gibbs Racing Toyota to a 30th-place result.

Hamlin, at least, is in eighth place in the Chase standings with a cut to the top eight looming at Talladega. But there’s a huge separation of 16 points between Truex in seventh and Hamlin. Realistically, as things stand now, five drivers are fighting for the final spot in the Round of 8.

But any of those drivers can advance automatically with a win.

Check out the unofficial results of the Bank of America 500.