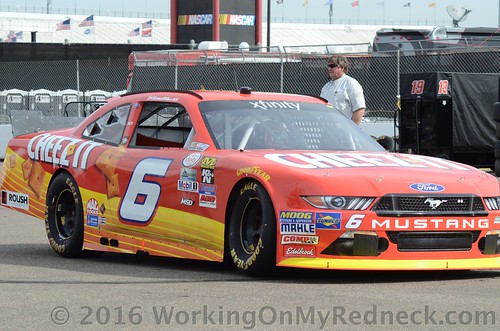 “My guys gave me a great piece to work with,” said Wallace after the race. “We’ve still got some work to do, but hopefully we can get it turned around and we’ll win a race. I can’t thank Leidos enough for jumping on our Ford Mustang, that was pretty cool to see the purple out there and everyone seemed to really like the way the car looked. We’ll just keep moving from here and try to solidify ourselves into the next round of the Chase next week in Charlotte.”

Wallace took the green flag for the 200-Lap event originally scheduled for Saturday afternoon from the ninth position after qualifying was cancelled after one round due to rain on Saturday. When the race went green early on Sunday morning Wallace charged forward, racing into the top five after the first lap and up to fourth before a tight-handling condition set in, shuffling Wallace back to sixth. Then, a caution on Lap 33 gave crew chief Seth Barbour an opportunity to make adjustments to the Leidos Mustang.

Wallace returned to the track in eighth and remained inside the top 10 until an inopportune caution during the first round of green flag pit stops on Lap 137 trapped the Roush Fenway Racing driver in 15th position, one lap down. Crew chief Barbour decided to utilize the wave around during this caution period, getting the Leidos Mustang back onto the lead lap.

In the closing stages Wallace fought to regain the track position lost due to the caution but there were too few laps remaining to make up all of the ground.

In the end Wallace took the checkered flag in the 11th position.

Wallace currently ranks sixth in the NASCAR XFINITY Series Chase Grid with one race remaining in round one. At the completion of next weekend’s race at Charlotte Motor Speedway, the bottom four drivers in the Chase Grid will be eliminated from the Chase.

Next up for the NASCAR XFINITY Series is Chase Race No. 3 at Charlotte on Friday, Oct. 7.