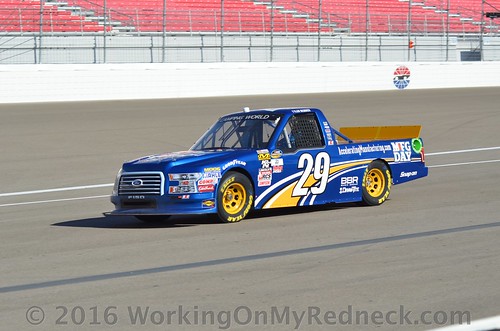 The victory was Reddick’s first of the 2016 season and marked the first time the Brad Keselowski Racing team had fashioned a one-two finish in the series.

Reddick led five times for 70 of the 146 laps around the 1.5-mile track, taking the advantage for the final time from Cole Custer shortly after the race’s third caution.

Custer, who finished third in the No. 00 Chevrolet, faded from contention after a furious battle with Hemric, one that likely assured Reddick of the victory as the pursuers used up the grip in their tires.

Reddick’s margin of victory over his teammate was 1.404 seconds as he completed the race at an average speed of 143.163 mph.

“We were spot-on from the beginning,” said Reddick, who started 16th in the 31-truck field but reached the top three by the 19th lap. The victory was his third in the series and first since June 2015 at Dover International Speedway.

Peters and Kennedy led the early stages of the race. Peters held the point until the 14th lap when Kennedy took over followed by Custer. The caution clock triggered the yellow flag at lap 39, giving Reddick the lead after pit service.

Reddick, Hemric and Custer exchanged the lead through most of the remainder of the event, which saw a dozen total lead changes among five drivers. Hemric led the second-most laps, 38.

Saturday night’s race was the second of three in the NASCAR Camping World Truck Series Chase’s Round of 8. While Reddick was not among the eight post-season qualifiers, a Hemric victory could have allowed the runner-up finisher to advance to the next round. As it is, he’s 15 points outside the six-driver cutoff line heading into the Oct. 22 Talladega Superspeedway elimination race, the same as John Hunter Nemechek, who finished 16th in Las Vegas.

“Unfortunately, I was a spoiler for my teammate,” Reddick said.

Hemic said it could be easy to be frustrated – so near yet so far – but noted Reddick did what he was supposed to do for the team.

“We’re both racing for the win,” he said. “We’re doing all we can to win these races. He did everything picture-perfect.”

New Hampshire winner William Bryan, who’s guaranteed to advance to the next round, continues as the points leader. Bell, Crafton, Kennedy, Peters and Sauter all are above the cutoff line after two of the three Round of 8 races.

Check out the unofficial results of the DC Solar 350.