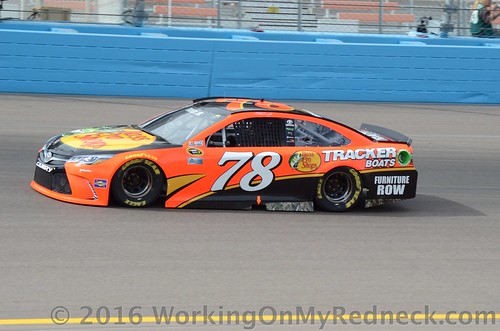 Last week a late-race caution helped propel Martin Truex Jr. to victory at Chicagoland Speedway. But on Sunday at New Hampshire Motor Speedway the Furniture Row Racing driver suffered the opposite effect when two cautions in the final 15 laps took him out of contention for the win.

Though he finished seventh after leading a race high of 141 laps in the second Chase playoff race, Truex had a shot at winning when he was running a close second to Matt Kenseth when the second-to-last caution came out on Lap 286 of 300.

“I raced with Matt (Kenseth) so hard for the lead for such a long time that I just kind of burned my tires up and then really had trouble getting going on those last two restarts,” explained Truex. “It was unfortunate to have a car that good all day long and then come home seventh. But all in all it was a fun day.”

“We led a lot of laps and the team did a great job all weekend,” said Truex. “We’ll go on to Dover and see if we can’t finish the deal off there.

Truex, who has now posted four straight top-10 finishes, is second in the Chase standings, one point behind leader Brad Keselowski.

The race had six cautions for 31 laps and there were 14 lead changes among eight drivers.

With a berth already assured in the second round of the Chase, Truex will close out the first round next Sunday (Oct. 2) at his home track – Dover International Speedway.