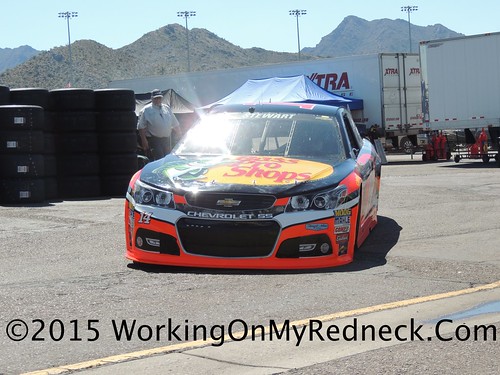 Tony Stewart, driver of the No. 14 Rush Truck Centers/Mobil 1 Chevrolet for Stewart-Haas Racing (SHR), began NASCAR’s 2016 Chase for the Sprint Cup with a 16th-place finish in the Teenage Mutant Ninja Turtles 400 Sunday afternoon at Chicagoland Speedway in Joliet, Illinois. The finish dropped Stewart from 11th to 12th in the Chase but kept him in contention among the 16 Chase drivers.

The Chicagoland race marked the beginning of the 10-race Chase and the first of the three first-round races that will eliminate four drivers from the title competition.

“It wasn’t much fun, but I was proud of Mike (Bugarewicz, crew chief) and the guys on the Rush Truck Centers Chevy,” Stewart said. “We were probably a car that was going to be three or four laps down if we had to race yesterday. Today we got the Lucky Dog (free pass) twice, but we were much better, we just weren’t good enough to be where we needed to be. We gained on it for sure. You gain on it and still aren’t going to be good enough to move to the next round if we don’t get better than this.”

Rain Friday forced NASCAR to cancel qualifying and set Sunday’s grid based on the rulebook. Two Saturday practices saw the No. 14 searching for the lap times the team wanted, but Stewart took the green flag under sunny skies Sunday in 11th place. It didn’t take many laps before he told the crew the changes made overnight were in the right direction.

“This car is already better than yesterday,” Stewart said. “We’re still tight in the middle third of the turn, but we can work on it.”

The caution fell for the first time on lap 49 just as Stewart entered the pit lane from 16th place for his first stop of the day. When he returned to the track, he and several others were a lap down. Before the restart, Stewart took the wave-around and returned to the lead lap in 19th place.Stewart raced in 18th through a second round of pit stops and appeared ready to fall off the lead lap until a Brian Scott spin on lap 119 brought out the caution and bunched the field.

“We are going in the right direction,” said crew chief Mike Bugarewicz, who told Stewart that his laps and the end of the third green-flag run were as fast as those of the six lead cars. “We’ve come a long way from the start of this weekend.”

The crew continued to work on the No. 14’s handling, and Stewart remained midpack and on the lead lap until leader Chase Elliott passed him with 78 laps remaining. Stewart stayed close to Elliott, and a few laps later a debris caution returned him to the lead lap, racing in 17th. The same thing happened with 20 laps remaining – Elliott lapped Stewart, but then an incident when there were four laps remaining brought out the caution and returned Stewart to the lead lap. Stewart ran the three-lap overtime without incident and finished 16th.

Stewart announced last November that 2016 is his final year of Sprint Cup racing. After missing the first eight races of the season with a back injury, Stewart returned to the car and turned in consistently impressive performances that included a victory at Sonoma (Calif.) Raceway in June which secured his spot in this year’s Chase.

Stewart outlined his Chase strategy to the team on the pace laps: “We are going to win as a team and lose as a team, but we are also going to have a lot of fun these next 10 weeks,” he said.

Kevin Harvick, driver of the No. 4 Jimmy John’s Chevrolet SS for SHR, finished 20th after having to start at the back of the 40-car field for an unapproved adjustment.

Martin Truex Jr. won the Teenage Mutant Ninja Turtles 400 to score his sixth career Sprint Cup victory, his third of the season and his first at Chicagoland.

Joey Logano finished .776 of a second behind Truex in the runner-up spot, while Chase Elliott, Ryan Blaney and Brad Keselowski rounded out the top-five. Denny Hamlin, Kasey Kahne, Kyle Busch, Matt Kenseth and Alex Bowman comprised the remainder of the top-10.

There were four caution periods for 22 laps with all 40 drivers finishing the 270-lap race around the 1.5-mile oval, which went into overtime and finished three laps beyond its scheduled distance.

Busch, Stewart and Harvick are representing SHR in this year’s Chase for the NASCAR Sprint Cup and they entered the first race of the 10-race, 16-driver Chase seeded 12th, 11th and fourth, respectively, in the Round of 16.Busch leaves Chicagoland in 10th with a four-point margin over 13th place. Stewart is 12th with only a single point separating him from 13th. Harvick is 14th, one point out of the top-12. Following the third race of the Chase at Dover (Del.) International Speedway, only those Chase drivers who have won a race or are among the top-12 in points will advance to the Round of 12.