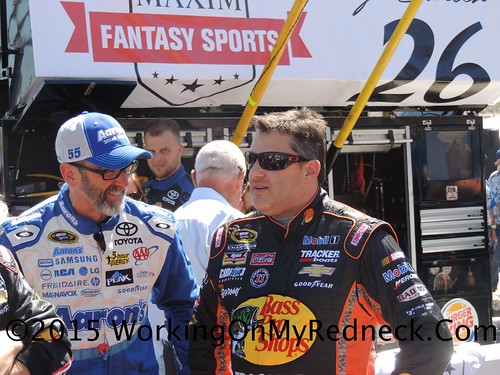 No. 14 Code 3 Associates/Mobil 1 Chevrolet driver Tony Stewart closed out the 26-race NASCAR Sprint Cup regular season Saturday night with a 33rd-place finish at Richmond International Raceway, but he sits 12th among the 16 drivers who qualified for NASCAR’s 2016 Chase for the Sprint Cup that begins next weekend at Chicagoland Speedway in Joliet, Illinois.

Saturday night proved a tough Richmond farewell for Stewart, who has long called the .75-mile, D-shaped, Virginia oval his favorite track on the circuit.

“We just struggled from the start tonight,” said Stewart, who started his 35th NASCAR Sprint Cup race at Richmond. “We made a lot of changes but couldn’t get to where we wanted to be.”

Stewart started 14th in Saturday’s race but soon reported difficulty turning in the corners and dropped outside the top-20. A pit stop went awry on lap 88 when Greg Biffle clipped Stewart as the cars came down pit lane, causing Stewart to spin sideways into his pit. Fortunately, the No. 14 suffered no damage other than dropping to 22nd.

“I know he (Biffle) didn’t mean to do that,” Stewart told the crew over the team radio.

Some nifty driving on the restart and improved handling saw Stewart jump to 12th by the 100-lap mark, but he drifted to midpack by lap 150 and soon fell off the lead lap. Only 16 of the 40 cars raced on the lead lap at the halfway point. Stewart spent the second half of the race attempting to return to the lead lap, which he did on lap 278.

With 117 laps remaining Stewart restarted the race in 29th following one of a record number of cautions. He was steadily climbing toward the front and had moved into ninth before tangling with Ryan Newman in an accident with 37 laps remaining. Stewart’s car caught fire; he safely climbed out, but his race was over.

While it wasn’t the result he wanted, Stewart will always hold Richmond in high esteem. The three-time champion’s first of 49 career victories occurred at Richmond on Sept. 11, 1999. He commemorated the victory Saturday night with a special helmet honoring his then-owner Joe Gibbs and Joe Gibbs Racing (JGR). Gibbs visited Stewart on the grid before the race to sign the helmet.

Stewart finishes his Richmond career with six victories: three in Sprint Cup, two in the NASCAR Camping World Truck Series and one in a Late Model stock car. He posted 11 top-five finishes in Sprint Cup competition and 19 top-10s and led a total of 950 laps in his 35 career Sprint Cup starts at Richmond.

Stewart enters the Chase after an impressive regular-season comeback following an off-season injury that kept him out of the cockpit for the first eight races. After returning to the car, Stewart posted five top-5s and seven top-10s. His victory at Sonoma (Calif.) Raceway on June 26 earned the Chase berth.

Kevin Harvick, driver of the No. 4 Jimmy John’s Chevrolet SS, led the four-car Stewart-Haas Racing (SHR) contingent Saturday night by finishing fifth in the race. It was Harvick’s 13th top-five this season and his 11th top-five in 32 career Sprint Cup starts at Richmond.

Kurt Busch, driver of the No. 41 Haas Automation/Monster Energy Chevrolet SS for SHR, finished eighth. It was his 17th top-10 this season and his 13th top-10 in 32 career Sprint Cup starts at Richmond.

Denny Hamlin won the Federated Auto Parts 400 to score his 29th career Sprint Cup victory, his third of the season and his third at Richmond.

Kyle Larson finished .609 of a second behind Hamlin in the runner-up spot while Martin Truex Jr., Brad Keselowski and Harvick rounded out the top-five. Kasey Kahne, Jamie McMurray, Kurt Busch, Kyle Busch and Joey Logano comprised the remainder of the top-10.

There was a race-record 16 caution periods for 89 laps, with eight drivers failing to finish the 407-lap race around the .75-mile oval, which went into overtime and finished seven laps beyond its scheduled distance.

NASCAR recalibrated the points for the 16 Chase drivers as soon as the Richmond race was over, with each driver getting 2,000 points. Drivers also received three bonus points for each of their respective wins during the 26-race regular season. For drivers starting the Chase with identical point totals, their seed was determined by the traditional tiebreaker of best finishes beyond race victories.

Positions 1-13 in the Chase field were determined by the drivers with the greatest number of wins after the first 26 races. Positions 14-16 went to the drivers who, while winless during the regular season, were the highest in points.

Harvick qualified for the Chase by virtue of his two wins at Phoenix International Raceway in March and at Bristol (Tenn.) Motor Speedway in August. Each of his regular-season victories was worth three bonus points. As such, Harvick carries six bonus points into the Chase to slot fourth among the 16 drivers. Harvick finished the regular season ranked first with 876 points. This is Harvick’s seventh consecutive Chase appearance and his 10th overall. He won the Sprint Cup championship in 2014.

Busch qualified for the Chase via his win at Pocono (Pa.) Raceway in June. He’ll start the Chase 10th with three bonus points.Busch finished the regular season ranked fifth with 762 points. This is Busch’s fourth-straight Chase appearance and 10th overall. He won the championship in his Chase debut in 2004.

Stewart will start the Chase 12th with three bonus points. He finished the regular season ranked 27th with 434 points. This is Stewart’s ninth Chase appearance and his first since 2012. Stewart won the Sprint Cup championship in 2005 and 2011. He won his first championship in 2002 under the former season-long format.

Ranked in order of where their bonus points seeded them, the 16 drivers competing for this year’s championship are:

The next event on the Sprint Cup schedule – the first race of the Chase – is the Sept. 18 Teenage Mutant Ninja Turtles 400 at Chicagoland Speedway in Joliet, Illinois.