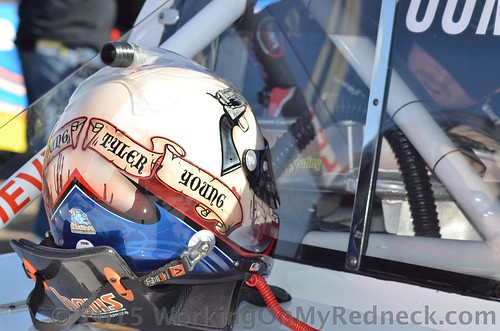 With the final race of the regular NASCAR Camping World Truck Series season upon the tour, Tyler Young and his Young’s Motorsports team head to Chicagoland Speedway hoping to secure their third top-10 finish of the year in Friday night’s American Ethanol e15 225.

“Can’t wait to get to Chicagoland,” said Young. “I always love going there. The track is super-fast and I’ve just found a niche for racing there. It has similar characteristics to a track like Kentucky (Speedway) or Kansas, but it’s still its own animal. I’m looking forward to Friday night.”

Statistically speaking, the ultra-fast 1.5-mile speedway of Chicagoland nestled 46 miles north of downtown Chicago has traditionally been one of the better intermediate tracks for the Midland, Texas native. In three starts, Young has qualified inside the top-20 and has maneuvered two top-15 finishes, including a track-best of 11th in 2014.

After taking a beating on the road course two weeks ago at Canadian Tire Motorsport Park, where a rare mechanical dampened the team’s spirits, Young and his Andrew Abbott-led team return to oval racing knowing they had a top-10 finish at Michigan International Speedway two races ago.

“I’m really proud of my team, because the gains that we have made with our intermediate program have been momentous,” added Young. “Canada was a bummer, but that’s in the past and we’re ready to move on. We know what happened and we hope it won’t happen again. The team has continued to work hard not only at the shop, but at the track over the last couples of weeks knowing we’ve been rewarding some good finishes this season. We hope for more of the same at Chicago.”

And while drafting won’t be as crucial in Friday night’s event at Chicagoland as it was at Michigan, the draft will still have some significance. Strong finishes at Atlanta Motor Speedway (13th) and Kansas Speedway (11th) and are proof of that.

“Chicago though won’t be a synch. The balance for us is making sure our No. 02 Young’s Building Systems / Randco Chevrolet Silverado can adapt from practicing and qualifying during the day – but then converting to a well-balanced nighttime feel. Actually, it reminds me a lot of Kansas earlier in the year. We weren’t that great early in the race, but we kept working on it and by the end of the night we were 11th.

“It’s not like a superspeedway, but you can use the draft to your advantage whether you’re behind or alongside another truck. A sniff of the air off from another truck can be huge and gain you a couple positons before you can blink an eye. It can work against you though just as fast. We’ll see what happens.”

With only eight races remaining on the calendar this season, Young who has run 11 of the 15 races thus far is hopeful to execute with more strong finishes and build towards 2016.

“We’re working hard on 2016 and hope to announce something soon,” added Young. “In the meantime, I’m focused on doing what I need to do both in and out of the truck – and my guys are resilient. They want Young’s Motorsports to be successful too, so we’ll just keep digging and hope that hard work and a little bit of luck pay off with good results for the rest of the year.”