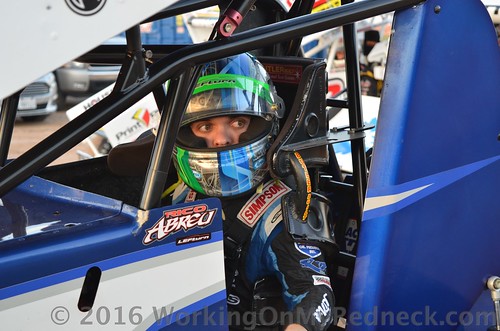 For the sixth time in seven years the Gold Cup Race of Champions trophy is staying in the Golden State after Rutherford, California’s  dominated much of the feature on Saturday, before holding off a late charge from Daryn Pittman to score his first career win in the 63rd running of the prestigious event.

A wild and intense 40-lap Gold Cup finale was presented to fans on Saturday night in Chico. The victory marked Abreu’s fifth career World of Outlaws Craftsman Sprint Car Series triumph aboard the Abreu Vineyards No. 24 machine. It was his second win of the season to go along with his victory at the Ironman 55 in Pevely during the month of August.

“This is pretty awesome and a special feeling to win the Gold Cup,” Abreu commented with a big smile after the race. “Hats off to my guys for all their hard work and for giving me a great car tonight. The track changed a lot over the course of the race, and the cautions definitely fell our way. Daryn [Pittman] was fast and gave me a good run there at the end. Moving up top on those later restarts helped us win this race. I’m glad to be back home racing in California and excited we could park it tonight in Chico.”

The main event started out with pole sitter & dash winner Paul McMahan of Nashville, Tennessee jumping into the lead of the race. Abreu showed his muscle early on however, by moving into second on lap-two and then claimed the top-spot on a lap five restart. Pittman battled his way forward at the same time to overtake McMahan for the runner up position on lap 12, before setting his sights on the leader. The track had widened out nicely for the main event and featured multi-groove racing throughout the field.

Pittman would challenge Abreu for the lead on lap 17, prior to a caution waving, which took the leaders out of traffic.

A number of stoppages plagued the flow of the feature, but through it all Abreu kept his composure out front. Towards the end of the race Pittman did find new life though and made a few bids at the lead, only to have the yellow flag wave on three separate occasions. Abreu wisely moved up to run the high-line on the final two restarts, giving him the chance to pull out to a large enough lead, ultimately coming out on top by just under half a second for the victory.

Dating back to 2010, he becomes the fourth different driver from California to win the Gold Cup Race of Champions!

Pittman crossed the stripe in second to cap a solid night for the Kasey Kahne Racing No. 9 team. The 2006 Gold Cup winner came close to adding a second victory at the event. The finish also moved him to third in the World of Outlaws standings, and he now sits just three-points out of second.

“We kept making gains on those restarts, but the cautions just didn’t fall my way tonight. Rico [Abreu] did a great job on the restarts though throughout the race, so I have to congratulate him on the win. My guys gave me a great car tonight, and I gave it my all in the feature but just came up a little short. We’ve been working hard all year, and I’m just trying to keep up with these kids out here. Huge thanks to everyone with KKR for allowing me to drive this car.”

Auburn, California’s Andy Forsberg had a tremendous run in the main event to round out the podium at the helm of the A&A Stepping Stone No. 92 mount. The former Silver Dollar Speedway track champ pressured Pittman at one point for second, before claiming third at the finish. It marked his second career podium result at the Gold Cup.

“This is almost unreal to be up here on the podium again at the Gold Cup Race of Champions,” Forsberg said. “To do this with the World of Outlaws is a big deal. I can’t thank my car owners enough for letting me come out and have fun with these guys. Thanks also to the fans that came out and supported this event.”

The most serious incident during the feature occurred on lap 35 when McMahan got upside down in turn one after contact from another competitor. He emerged from the car alert, but complaining of neck pain. McMahan was then transported to a local hospital for evaluation.

Paradise, California’s Kyle Hirst won the night’s Last Chance Showdown, with British Columbia driver Robbie Price bringing home the win in the C-main. Four 10-lap heat races were held during the night and claimed by Rico Abreu, Brad Sweet, Paul McMahan and Austen Wheatley. Sweet’s night would come to a premature end when he lost a motor while battling in the top-five during the feature. Abreu started out the night by setting fast time with a blistering lap of 11.150 around the quarter-mile.