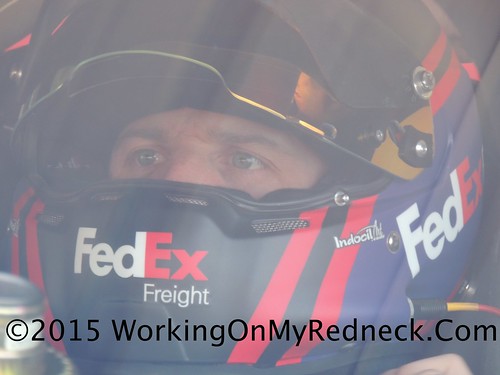 Denny Hamlin won a wild race at his home track, and the top four Chase hopefuls entering Saturday night’s Federated Auto Parts 400 all held serve at Richmond International Raceway in an event that ended in overtime after a record 16 cautions.

Jamie McMurray locked up a spot in the Chase for the NASCAR Sprint Cup with a seventh-place finish, and Austin Dillon did likewise with a 13th-place run.

Sunoco rookies Chase Elliott and Chris Buescher both weathered some tense moments to qualify for NASCAR’s 10-race playoff, the first time two rookies have ever been included in the Chase field—and the first time any rookie has made the Chase since Hamlin accomplished the feat in 2006.

Elliott brought out the third caution of the night after contact with the Turn 1 wall, but he recovered to finish 19th to earn his Chase spot with room to spare.

Buescher, on the other hand, had to make a precautionary green-flag pit stop on Lap 308 of 407 because of a tire that was deflating and lost two laps in the process. But Buescher regained the lead lap during a spate of late cautions and came home 24th, his path to the Chase made easier when David Ragan, his chief rival for 30th place in the Sprint Cup standings, was eliminated in a eight-car accident on Lap 363.

Hamlin took control of the race when his pit crew handed him the lead under caution on Lap 322. Six cautions followed, the last of which sent the race to overtime when Regan Smith slammed the outside wall on Lap 399 of a scheduled 400.

Kyle Larson pitted for fresh tires under the yellow and streaked from 12th to second on the two-lap overtime run, but the driver of the No. 42 Chip Ganassi Racing Chevrolet didn’t have time to catch Hamlin’s No. 11 Joe Gibbs Racing Toyota, which crossed the finish line with a margin of victory of .609 seconds.

Hamlin, who grew up in nearby Chesterfield, was elated to win the race in front of his home crowd.

“That’s what’s so special about it,” said Hamlin, who started from the pole and led the last 86 laps (189 total) on the way to his third victory of the season, his third at the .75-mile track and the 29th of his career. “You get to do it at home.

“I see all the extra Denny Hamlin shirts and hats and everything, and it just fires me up every time I get here. This was a great car, and hopefully we can use it in the Chase.”

Martin Truex Jr. ran third, followed by Brad Keselowski and Kevin Harvick. Kasey Kahne, who needed a victory to advance to the Chase, ran sixth after a hard-fought run to the finish. McMurray, Kurt Busch, Kyle Busch and Joey Logano completed the top 10.

With the exception of Kahne, all top-10 finishers on Saturday will compete in the Chase.

Ryan Newman’s hopes of an eleventh-hour Chase miracle ended abruptly on Lap 363 when contact between his No. 31 Chevrolet and Tony Stewart’s No. 14 Chevy sent both cars out of control, blocking the track at the entry to Turn 3.

All told, eight cars were in the accident, but no driver was more incensed than Newman, who was racing hard with Stewart for the 10th position in a last-ditch attempt to make the Chase by winning the race.

“The No. 14 (Stewart) cut across my nose into Turn 1, and I got into him after that, but he’d already chopped into me and messed up my line, and I clipped him a little bit coming off of (Turn) 2,” Newman said of Stewart, who was racing at Richmond for the last time in a Sprint Cup car. …

“And then he just drove across my nose on the back straightaway. We’ll keep fighting like we always do. It’s just unfortunate not to end the way we wanted to. It’s just disappointing that you’ve got somebody old like that, that should be retired the way he drives. It’s just ridiculous.”

Not surprisingly, Stewart had a different perspective.

“That was the third time he’d driven into me during the night, and how many times does a guy get a free pass until you’ve had enough of it?” said the three-time champion.  “He’s got to do his part racing for a championship, too, and to race to get in there, and if you’re going to run into guys — I go into (Turn) 1 and he dive bombs in there.

“I’m already coming down, so it’s not like I was trying to squeeze him in the infield or something. Ryan and I have been good friends. I don’t do that to him. But he hits me in 1, he hits me off of 2, and it’s like the third time by that time. There was once early in the race that nobody saw. Three times, that’s two more times than I normally let somebody run into me.”

And as to Newman’s suggestion Stewart should be retired already?

The Lap 363 pileup that ended Newman’s Chase hopes—and ended with Dylan Lupton’s Toyota on the hood of Newman’s car—also locked Buescher into NASCAR’s playoff with the elimination of Ragan from the race.

“It was a crazy race,” said Buescher, the first driver to represent Front Row Motorsports in the Chase. “I can’t believe how many cautions we had. We got involved in one of the accidents, had a tire go down, just a very eventful day. Just so proud to be here.”

Elliott was just relieved to shed the stress of an eventful race.

“I just think we have to first off be thankful that we were able to get in tonight after the night we had,” Elliott said. “I can’t thank my guys for working as hard as they did.

“I’ve never had to go through—I’m sure they haven’t either—all the stuff we went through tonight, so hats off to them, fixing our car multiple times.”

Chase Notes: With four victories this season, Kyle Busch starts the Chase next Sunday at Chicagoland Speedway as the top seed with 2,012 points, the same total earned by second-seeded Keselowski, also a four-time winner … With three victories and 2,009 points, Hamlin is the No. 3 seed, followed by Harvick, Carl Edwards, Truex, Matt Kenseth, Jimmie Johnson, Joey Logano, Larson, Stewart, Kurt Busch, Buescher, Elliott, Dillon and McMurray. … Truex’s No. 78 Toyota failed the laser inspection station after the race. If penalties are warranted, they will be announced before the Chase begins.

Ganassi Taps Ross Chastain For The No. 42