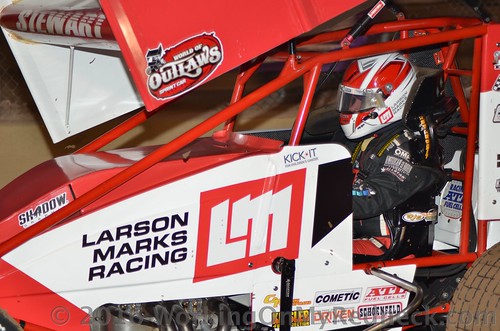 Shane Stewart knew that once he saw a chance to capitalize and make a move, he’d be able to celebrate in victory lane.

With Joey Saldana leading and getting into lapped traffic in the main event on Friday’s race of the 63rd annual Gold Cup Race of Champions, Stewart slid his way around the leader on lap 12 to take the lead off the back straightaway.

Stewart would hold on for the win in the 30-lap 410 sprint car race that featured the World of Outlaws Series at Silver Dollar Speedway.

The final day of the Gold Cup is Saturday, which again features the World of Outlaws Series and will be capped with a 40-lap main event.

Stewart, from Bixby, Oklahoma, drove his No. 2 Larson-Marks car (owned by Kyle Larson and Justin Marks) into victory lane and emphatically celebrated his sixth win of the season in front of the packed grandstands.

“It’s a really big race in the sprint car industry and the sprint car world,” Stewart said. “We were here last year. We weren’t able to capitalize and win on Saturday. So hopefully this year will be our ticket.”

Stewart said he was confident heading into Friday’s race, but cautions happening at the right time allowed him to stay in a good position the rest of the night.

Saldana finished second and Jac Haudenschild took third in Friday’s main event. Rico Abreu, the familiar name at Silver Dollar who’s now in the NASCAR Crafstman Truck Series, was caught in a collision and did not finish the race. Abreu qualified for the fastest time with 11.652 seconds..

In the B main event for the sprint cars, Justyn Cox took the lead on lap four. Despite catching the back of the field, Cox stayed out front for the win. Logan Schuchart, Jason Sides and Jason Johnson rounded out the top four finishers who were also the final drivers to transfer to the main event.

Princeton’s Mason Moore won the dash race, giving him the pole position for the main event. However, in the A main Moore suffered tire damage that forced him to move to the back of the field.

DJ Netto dominated the C main race after stretching his lead to a full straightaway over Sean Watts.

Haudenschild, who hadn’t won a Gold Cup since 2008, looked like he never missed a step at Silver Dollar when he held off Abreu for the win in the third sprint car heat race.

Moore stayed in front of David Gravel as he cruised to a win in the second heat race and Saldana won the first heat of the night, beating out Daryn Pittman.