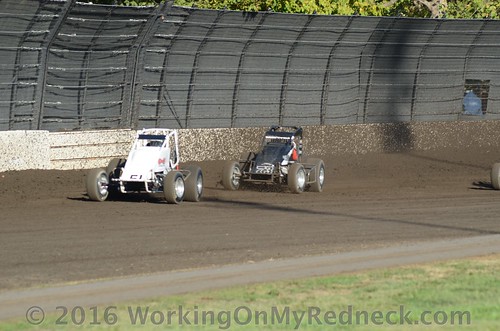 The Silver Dollar Speedway was surrounded with 67 sprint cars for night one of the 63rd Gold Cup Race of Champions. On hand were the California Sprint Car Civil War Series and the Wingless Series presented by Joe Hunt Magnetos. Of the 67 sprint cars, 52 of them were signed in to compete as a Civil War Series entrants.

Things could not have gone better for Hanford’s Mitchell Faccinto. In a storybook style night, Faccinto broke the all-time 360 sprint car track record in qualifying. His lap time was a blistering 11.419. The previous record was set by Herman Klein back in 2010 at an 11.621. Faccinto then went on to win the first 10-lap heat race of the night. Starting from the front row he led all six laps to win the dash. Faccinto lined up next to Kyle Hirst at the start of the 30 lap main event. While the track was already looking like it was taking rubber, it was important to make sure you got a good start. Faccinto was able to do so and went on to lead all 30 laps and record his first feature event at Silver Dollar Speedway. Hirst came home in the second spot while Shane Golobic ran third and Justyn Cox ended up fourth.

Faccinto became the 8th different winner in nine events during the 2016 Civil War season. Championship point leader Andy Forsberg finished the main event in fifth. Forsberg’s championship counterpart, Mason Moore, finished in the eighth spot. Give credit to the “Wild Child,” Jac Haudenschild as he wheeled the Paul Silva #57 from 12th to a 6th place finish. Rico Abreu ran consistent all night and brought the #24 home in seventh.

Kalib Henry won an elongated B-main for the Civil War Sprints. Henry cruised to the win and the race ran smooth until a last lap, last turn spin by Michael Ing brought out the caution. On the restart, Steven Tiner had to of had steering issues and went in to turn one and plowed into Logan Seavey, who in turn spun and collected Willie Croft. At the time of the accident, Seavey and Croft where well on their way to a feature event start. Tiner was able to keep going and ultimately maintain enough speed to transfer out.

The next restart saw Jared Ridge spin and collect Croft again. Luckily for the fans Corey Eliason made a last lap power move around two cars and got the second to last transfer spot. Watching the electrifying move by Eliason is what the Gold Cup crowd loves. Jarrett Soares was the sixth and final transfer to the feature event.

Mike Monahan and Eliason each won their individual C Main events. Because of the large field of cars, the Civil War officials split up qualifying in 26 cars between group one and group two. This allowed for two separate C Main events. Only the winner of each race transferred to the B main.

Other heat race winners included Kyle Hirst, Justyn Cox and Brady Bacon. Unfortunately, it was reported that Bacon was too sick to compete in the 30 lap sprint car main event. Matt Barber was the first alternate in the B main and he got the A Main start.

Josh Vieira was fresh off his Marysville Raceway track championship only to thrill the crowd with a last lap, last corner pass on then leader Klint Simpson. While Simpson had led a lot of the race and did a good job he couldn’t seal the deal. Vieira was pumped as he circled the track knowing he got the win. Don Emery did a good job and held on for third. Scott Hall was penalized for a jump start during the second to last caution and rebounded to finish fourth. Jeremy Newberry made a rare Chico start and finished fifth. A first lap turn four wreck ended Angelique Bell and Brent Steck’s night.

Terry Schank Jr. was driving the #27 tonight and was in contention all night for the win but got pinched into the front stretch wall on lap 15 that resulted in a collapsed front end. Brett Youngman made contact with a slowing Nick DeCarlo on lap 21that ensured another caution. DeCarlo had led a good majority of the race up to that point and it was reported he had a motor issue.