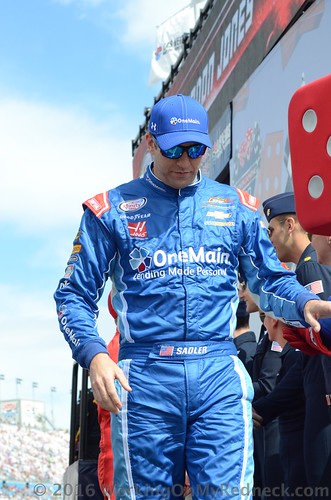 Elliott Sadler had a passenger for Saturday’s VFW Sport Clips Help a Hero 200 at Darlington Raceway—in spirit at least.

After a breathtaking battle against Denny Hamlin over the closing laps, Sadler crossed the finish-line .454 seconds ahead of Denny Hamlin to win for the first time at The Lady in Black—and immediately dedicated the victory to JR Motorsports team owner Dale Earnhardt Jr., who announced on Friday he would sit out the remainder of the 2016 NASCAR Sprint Cup season because of a concussion.

“This win today is for my man, Dale Earnhardt Jr.,” Sadler said. “I know he’s going through a tough time. He’s not being able to race his race car for the rest of the year. He was riding there with me today, and he’s given me such a great opportunity to be a part of his race team.”

With two laps left in the 147-lap event, however, the outcome was in the balance. Sadler had a lead of .715 seconds when he crossed the stripe to complete Lap 145. But he started sliding toward the outside wall in Turn 2 and had to fight to keep his No. 1 Chevrolet under control.

Hamlin pulled to the inside and the cars raced side-by-side down the backstretch, but as they entered Turn 3, Sadler regained momentum and pulled ahead in the top lane as the drivers approached the white flag. Hamlin got an excellent run through Turns 1 and 2 on the final lap but not enough to make a pass.

“I messed up, man,” Sadler said of the close call on the penultimate lap. “I could kind of see him coming, and I was trying to make up some time, and I started focusing on a lapped car in front of me, and I ran out of room and almost gave it to him.

“But all in all, we were able to hold him off.”

The victory was Sadler’s first at Darlington in 32 starts across all three of NASCAR’s national series. He won for the second time in the XFINITY Series year and for the 12th time in 320 XFINITY starts.

Making only his second start of the season in the series, Hamlin was frustrated in his attempt to win at Darlington for the fifth time.

“We definitely had a good line going through (Turns) 1 and 2,” Hamlin said, “But I didn’t get a good restart (on Lap 112, after the last of three cautions), he got position on me, and track position meant so much. Once he ran the high line, my car was entirely too tight to run low.

“It eliminated our passing opportunity unless we could slide-job him there in Turn 3 on that one lap he messed up, but it didn’t happen.”

Daniel Suárez ran third after challenging Hamlin for second place—until a brush with the wall ended his chances.  But the driver of the No. 19 Joe Gibbs Racing Toyota held third place ahead of Kyle Larson, who spun entering pit road from the lead on Lap 103 to cause the final caution and caused a major shakeup of positions within the top 10.

Check out the unofficial results of the VFW Sport Clips Help A Hero 200.