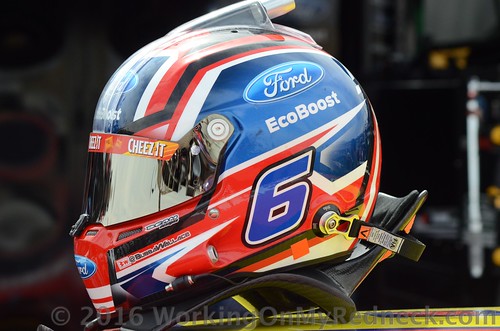 “We just struggled to find grip,” said Wallace after the race. “I’m proud of the effort my guys gave today and it was an honor to drive this throwback paint scheme to Mark Martin. We’ll move on from here and get after it next week in Richmond.”

Wallace took the green flag from the 14th position after rains from Hurricane Hermine forced NASCAR to cancel all track activity, including qualifying on Friday. As a result, the field was set by owner points per the NASCAR Rule Book. In the early stages of the event Wallace maintained his top-15 track position despite reporting that the No. 6 Ford Mustang was struggling to find grip through the corners.

Crew chief Seth Barbour decided to utilize a Lap 51 caution to bring Wallace to pit road for four tires and a chassis adjustment in the hopes of improving the handling of the car through the corners. Wallace took the ensuing restart from the 15th position but was shuffled back to 19th and ultimately off of the lead lap during the long green flag run that followed.

Although off of the lead lap Wallace never gave up, climbing back up to 17th and within reach of the free pass position as the race reached its closing stages.

In the end, Wallace would cross the start/finish line for the final time in the 17th position.

Next up for the NASCAR XFINITY Series is Richmond International Raceway on Friday, September 9 at 7:30pm EST.