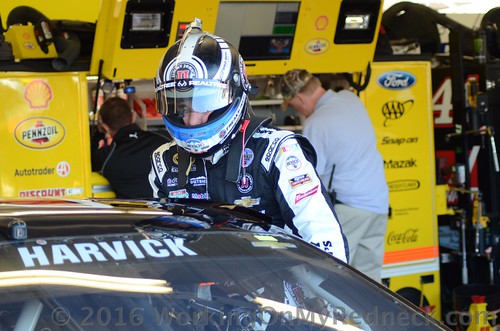 Harvick started fourth and raced his way to the lead on lap 26 immediately following the competition caution. He held the top spot until lap 57, when he reported that the No. 4 Chevrolet was struggling with a loose-handling condition.

The Jimmy John’s Chevrolet raced in the top-five for the majority of the event and was running in fourth when the final caution flag of the day flew on lap 188. As the top-three stayed out on older tires, Harvick came to pit road for a two-tire stop, hoping to chase down the leaders for the win. He restarted sixth on lap 161 as the first car on fresh tires, but he was held up on the restart when leader Chase Elliott spun his tires in the outside lane. Harvick was able to gain one position in the closing laps to cross the finish line in fifth.

“We just lost the handle there on the last couple of runs,” said Harvick, who also finished fifth in the June race at Michigan. “For whatever reason we got really loose in, and then after that on the restart we were tight on two tires. Everybody on our Jimmy John’s/Busch Beer Chevrolet did a good job – we just didn’t quite have what we needed to win the race today.”

The Bakersfield, California, native led twice for a total of 33 laps to move his 2016 season total to 997. If he is able to lead three more laps through the next 12 Sprint Cup events he will surpass 1,000 laps led for his third-straight season. Prior to joining SHR his single-season best was 895 laps led in 2006.

Tony Stewart, driver of the No. 14 Mobil 1 Chevrolet SS for SHR, finished 21st.

There were four caution periods for 17 laps, with one driver failing to finish the 200-lap race.

Harvick, Busch and Stewart are all eligible to compete in the 16-driver, 10-race Chase for the NASCAR Sprint Cup, which begins after the Sept. 10 race at Richmond (Va.) International Raceway. All have won a race this season and are among the top-30 in points, the two requirements necessary to secure a spot in the Chase. Patrick can also earn a Chase berth by winning a race and staying inside the top-30. Two races remain before the Chase begins Sept. 18 at Chicagoland Speedway in Joliet, Illinois.

The next event on the Sprint Cup schedule is the 67th running of the Southern 500 at Darlington (S.C.) Raceway. The second-to-last race before the Chase starts at 6 p.m. EDT Sunday, Sept. 4, with live coverage provided by NBC.