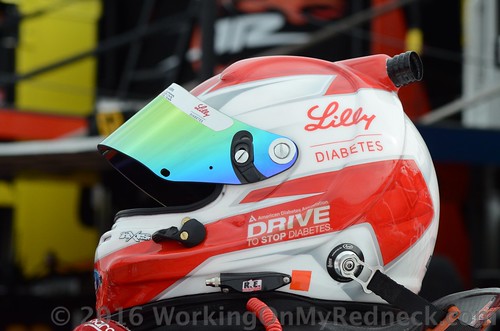 “I’m just so proud of our No. 16 Lilly Diabetes/American Diabetes Association team,” said Reed. “We never gave up, even after a rough start with not being as good as we wanted in practice yesterday. That’s the key – just never give up on anything in life and you will find success.”

Reed started the race from the seventh position on Saturday afternoon. After just one circuit around the track, the field was slowed by caution. The team did not pit under the caution flag and restarted eighth on Lap 6. Two laps later, crew chief Phil Gould brought Reed down pit road under green for four fresh tires and fuel.

As green-flag stops were cycling through, the second caution flag was displayed on Lap 11. Reed was scored 22nd and stayed out as the rest of drivers who had not pitted made their stops. After the pit stops cycled through, Reed restarted eighth on Lap 15.

After the restart, Reed dropped back to 12th as cars with fresher tires were able to get by. He reported to the team that he needed left-rear lateral grip. Soon after, the caution was displayed for a brief rain shower. Under the caution, Reed pitted on Lap 27 for four tires, fuel and an air pressure adjustment. He restarted in the ninth position on the impending restart.

With 16 laps to go, Reed had advanced to eighth and settled into ninth with 10 laps to go as the caution was again displayed. Gould brought his driver down pit road under the caution flag with eight laps remaining in the race for tires, fuel and an air pressure adjustment. He restarted 17th on the following restart as many drivers did not pit.

Reed made his way up to the ninth position by the next caution flag with five to go. He restarted there with three laps to go in the event and was scored 10th when the caution flag was displayed for the last time with one to go. This caution sent the race into overtime.

On the final restart, Reed restarted ninth and was able to pass several cars to cross the finish line fifth at the two-mile road course.

Reed and the rest of the NASCAR XFINITY Series will be back on track on Saturday, September 3rd at Darlington Raceway.

The American Diabetes Association is leading the fight to Stop Diabetes® and its deadly consequences and fighting for those affected by diabetes. The Association funds research to prevent, cure and manage diabetes; delivers services to hundreds of communities; provides objective and credible information; and gives voice to those denied their rights because of diabetes. Founded in 1940, the Association’s mission is to prevent and cure diabetes and to improve the lives of all people affected by diabetes. For more information please call the American Diabetes Association at 1-800-DIABETES(800-342-2383) or visit diabetes.org. Information from both these sources is available in English and Spanish.