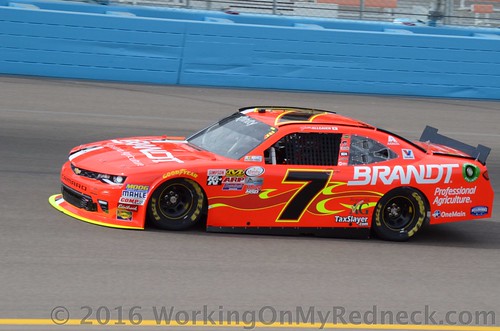 “Road America is a really cool track. It’s packed with NASCAR fans and it’s just a lot of fun to drive. It’s very technical. It has a lot of elevation changes and it’s very long. We had a lot of speed at Mid-Ohio when it wasn’t raining so all I’m really hoping for this weekend is a dry track.”

“I am really looking forward to getting to Road America this weekend in the No. 88 SunEnergy1 Chevrolet. We have had some good runs the past two road-course races, including getting up to third place in Ohio, but unfortunately didn’t have a great finish to show for it. JR Motorsports has put together a great road-course program and I am ready to get behind the wheel for the final road-course race of the year.”

“It’s always a lot fun racing at Road America. I actually came close to winning there in 2011, but ran out of fuel on the last lap, so I feel like one got away from me. We’ve been strong on road courses and have come so close to winning this season. It would be great to finally get a victory for this BRANDT Professional Agriculture team.”

“We battled really hard to get that sixth-place finish at Bristol, and it’s kind of what we have to do over these next three races if we want to make the Chase. Marcus (Richmond, crew chief) and the guys are giving me good Chevy Silverados, and we are clicking from a strategy standpoint. We’d like to win and assure ourselves and Haas Automation and OneMain a spot in the Chase, but we’ll take it any way we can get it. I’m looking forward to racing at Michigan, because there’s a lot of room to race and go fast. ”