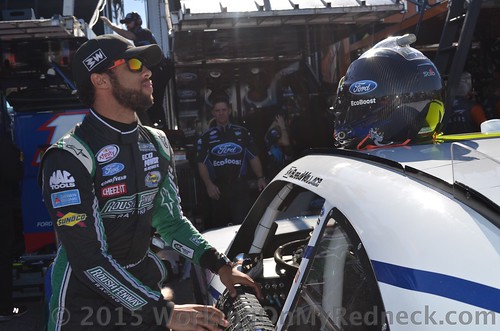 Bubba Wallace’s No. 6 Ford Mustang will carry a Retro 90-91 throwback scheme that mirrors the colors NASCAR Hall of Fame driver Mark Martin ran on his No. 6 Ford Thunderbird in the Sprint Cup Series as Roush Fenway evolved into a perennial championship contender in the early 1990s. The paint scheme also pays homage to Ford Motor Company, who has provided manufacturing support to Roush Fenway since it launched NASCAR operations in 1988 and has worked hand-in-hand with iconic team owner Jack Roush since the late 1960s.

“I’m really excited to run this paint scheme at Darlington,” said Wallace. “I think it will be one of the best looking schemes on the track that weekend. Everybody knows about Mark Martin’s accomplishments in NASCAR and his importance to the legacy of Roush Fenway. He’s going into the Hall of Fame this year and it’s really an honor to run this scheme on our car at Darlington.”

“I’m really looking forward to seeing that car back out on the track,” said Martin, who won 35 Cup races driving for Roush Fenway. “We really started to hit our stride during that time and it was great to go to the race track every week knowing that we had a chance to win and that we were competing for championships at the highest level.”

Like Wallace, Martin also piloted the No. 6 NASCAR XFINITY Series entry in 2006, driving the car to poles at Michigan and Texas and earning five top-five finishes in seven starts that season.