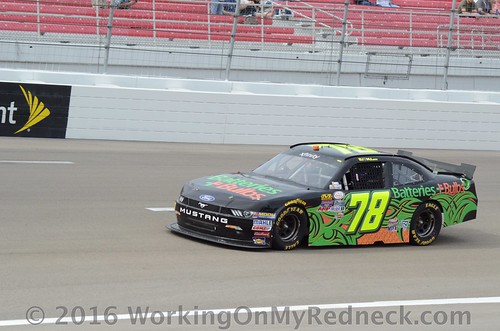 In the core of a crucial summer stretch of 20 XFINITY Series races in 21 weeks, McLeod returns to the “World’s Fastest Half-Mile” looking to land a rock solid concrete finish for new marketing partner Short Traxs Construction.

Founded in 1993 and based in Arkansas, Short Traxs Construction is a family-owned business specializing in all aspects of the roofing industry, including industrial and residential.

“We as a company are honored to have partnered with B.J. and his B.J. McLeod Motorsports for Bristol this weekend,” said Short Traxs president John Kelly. “We look forward to not only a good finish, but we look forward to our relationship growing for the rest of this season and 2017.”

“We’re excited to have Short Traxs Construction on our car this weekend at Bristol,” said McLeod. “They are a new partner in NASCAR and we really want to have a good run for them in their debut. Bristol is a great venue to showcase a new sponsor because of its unique demeanor. As they say, ‘It’s Bristol baby!’”

If the Wauchula, Florida native seems upbeat about getting to “Thunder Valley” this weekend, the answer is simple. He is.

In April, the short track ace made his debut at the 0.533-mile concrete oval, qualifying 28th. During the race, McLeod found his groove, learned a lot and finished 28th.

Fast forward four months later, 28th won’t be good enough for McLeod and his B.J. McLeod Motorsports team as the Mooresville, North Carolina-based operation has put an emphasis on their short track program over the last few months.

They hope to continue to showcase their improvement in Friday night’s anticipated slugfest.

“Overall, I’m really proud of the improvements we’ve made lately,” added McLeod. “We’ve started out on short tracks and gradually been working our way up to the other tracks. Our performances this summer at Iowa Speedway and New Hampshire Motor Speedway have me really looking forward to Friday night.”

After spending 11 weeks 21st in the XFINITY point standings, McLeod leaped inside the top-20 last weekend at Mid-Ohio Sports Car Course and with plenty of racing still on the schedule, McLeod is hopeful to climb a few more positions by year’s end.

“We’ve been picking away at it,” said McLeod. “Good finishes will help us as we try to leap our way a position or two by Homestead in November. We’re in a critical stretch right now of racing and for the most part, we’ve been able to keep the bad luck at bay. If we can continue to do that, anything is possible.”

McLeod, who pilots the No. 78 Ford Mustang full-time in the XFINITY Series reunites with Travis Kvapil this weekend at BMS. Kvapil, a longtime NASCAR veteran will pilot the No. 15 Ford Mustang in Friday night’s Food City 300 in a collaborative effort between B.J. McLeod Motorsports and Rick Ware Racing. The Janesville, Wisconsin native will make his sixth start of the year, more than his combined starts from 2001-2009.

“It’s so awesome working with Travis,” McLeod said. “He’s a good dude who loves racing and is a good teammate. We can bounce ideas off each other and he’ll tell it like it is. He’s been very open about giving us ideas on what to do to help us improve our program even when he’s not in the seat.

In practice on Thursday, McLeod was 27th quickest overall – but didn’t show their full potential – giving the team a lot of confidence for race day.

Veteran industry crew chief George (David) Ingram Jr. will call the shots for the No. 78 Short Traxs Construction Ford Mustang for the 22ndrace of the 2016 NASCAR XFINITY Series season.

For more on B.J. McLeod, please visit his official Facebook page, while also visiting the team’s new website at BJMcLeodMotorsports.com.Additionally, the team is growing their presence on Twitter, with the team’s new account @teamBJMcLeod. McLeod also utilizes his personal twitter too, @BJMcLeod78.

Marketing partnership opportunities are available for the No. 78 Ford Mustang for the remainder of the 2016 NASCAR XFINITY Series. Interested inquiries are encouraged to contact pr@bjmcleodmotorsports.com.