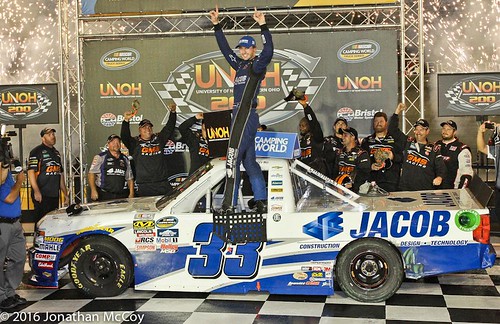 “I can’t put it into words,” said Kennedy, the son of International Speedway Corporation CEO Lesa France Kennedy. “Someone asked me earlier today what it’s like going to Bristol for your first time and to win here is just so cool. I’m speechless. The guys gave me an awesome truck. Everyone at GMS Racing, Jacob Companies, the fans in the stands, everybody watching on TV, gosh this is just the coolest day of my life.”

With two laps to go, Moffitt, driving the No. 11 Toyota Tundra – the truck piloted earlier this season by Kennedy – gave the Daytona Beach, Florida native a shot in the bumper, but Kennedy refused to be rattled and stretched his lead to 0.274-seconds at the checkered flag.

“I was just thinking go as fast as possible on this last lap,” Kennedy said. “I knew Brett was putting pressure on me from behind. I appreciate him racing me clean. This is just so cool. These guys deserve it. They work so hard.”

Moffitt, who earned a career-best second-place finish, didn’t have quite enough for Kennedy’s No. 33 Chevrolet Silverado when it counted most.

“We had a good truck, a strong truck all day,” Moffitt said. “We ran top-five, top-10 most of it. He had just enough to get away from us on that last restart. After that, we got to him once but couldn’t get around.”

Although Bristol has been widely known for its bump-and-run racing, Moffitt, continuing to fill-in for the recovering Matt Tifft, said he tried once, but couldn’t get to Kennedy to try again.

“I’m going to race people the way I want to be raced,” he said. “It is Bristol, so if you need to move someone, you got to move them. I just wasn’t quite good enough in the center to get to him. He slipped up a few times and I was able to get to his bumper once, but didn’t get to him hard enough. I was really waiting for him to make a mistake so I could shove my nose in there, but he executed when he needed to. He hit his marks and I just wasn’t able to get to him.”

With the victory, Kennedy virtually secures a spot in the inaugural NASCAR Camping World Truck Series Chase with three races remaining in the regular season.

“We put this deal together (with GMS Racing) a couple months ago and I never imagined – I never would have imagined going into this race that we would be here today,” Kennedy said. “I thought we were a top-15 truck or a top-10 truck, but to actually be here in Victory Lane means the world to me.”

Check out the unofficial results of the UNOH 200.