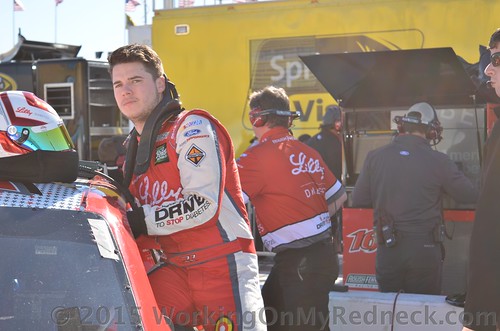 Roush Fenway Racing driver Ryan Reed and the No. 16 Lilly Diabetes/American Diabetes Association team finished 11th on Saturday at Mid-Ohio Sports Car Course after starting eighth and running in the top 10 for the majority of the race.

“We had an awesome car today and it’s a shame our finish didn’t reflect all of the hard work we put in,” said Reed. “Racing in the rain today was definitely interesting, but I was proud of how well we hung in there and avoided any carnage. The end didn’t go our way, but I’m just so proud of our entire Lilly Diabetes/American Diabetes team and how well-prepared we were for today’s race.”

With heavy rain showers off in the area, the field took the green flag for the 75-lap Mid-Ohio Challenge just after 3:30 p.m. ET. Reed rolled off sixth after two cars dropped to the rear at the start of the race.

The field was slowed by caution for rain for the first time on Lap 2. Crew chief Phil Gould brought Reed down pit road to put on rain tires on Lap 4, advancing Reed to the fifth position on the impending restart on Lap 9.

After the restart, contact from another car sent Reed into the grass. He was relegated to the ninth position, where he ran until the next caution on Lap 13. With another heavy rain shower over the track, the field restarted on Lap 18 and was slowed by caution again on Lap 20 while Reed ran sixth.

The field restarted on Lap 23 before being slowed by caution again on Lap 25 and three laps later on Lap 28. Under the Lap 28 caution, Reed and Gould discussed pit strategy, but decided to stay out until they were in their fuel window.

Reed restarted in the fourth position on Lap 31, but the caution was displayed soon after the restart. That caution allowed Reed to move up to the third position by the Lap 35 restart. As cars with fresher tires gained ground, Reed lost a few positions before pitting on Lap 41 under green for slick tires and fuel, as the track had begun to dry and gained more grip.

After pit stops cycled through, Reed ran ninth with 25 laps to go as the field was again slowed by caution.  The rain began to fall under the caution, sending all drivers down pit road to put rain tires back on. Reed and the No. 16 team also topped off on fuel on their stop, which came at Lap 53.

With some trouble getting back on track, Reed fell back to the 19th position, but was up to 15th by the next caution on Lap 55. With possible damage, the team discussed whether to come down pit road, but decided to stay out.

Reed restarted 14th with 14 laps to go and was up to ninth with 10 laps to go. Reed got tagged from behind with nine laps remaining, but was able to hold on to the ninth position. He raced up to eighth with five to go before the field was slowed by caution for the last time.

On the restart, Reed ran in the eighth position but again found himself off-track due to contact with another car. He rebounded from the spin to cross the finish line in the 11th position.

Reed and the rest of the NASCAR XFINITY Series will be back on track on Friday, August 19th at Bristol Motor Speedway.