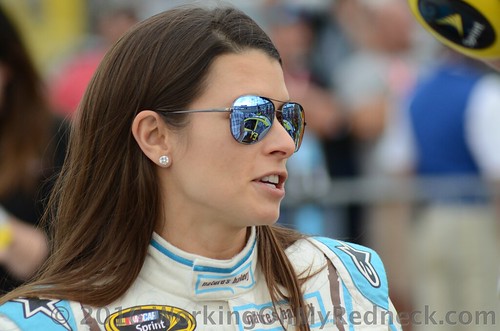 After leading 11 laps at the midpoint of the event, Danica Patrick and the No. 10 Nature’s Bakery Chevrolet SS team for Stewart-Haas Racing (SHR) persevered after a late-race accident to score a 21st-place finish in Sunday’s at The Glen NASCAR Sprint Cup Series race at Watkins Glen (N.Y.) International.

Patrick started the race from the 31st position. After dropping to 34th, she raced her way back up to 31st by lap five. Crew chief Billy Scott made a strategy call to pit under caution at lap 14 for fuel and a chassis adjustment. A number of teams elected not to pit, and Patrick restarted from the 20th position at lap 15.

As the teams that didn’t pit during the caution period made their way to pit road under the following green-flag run, Patrick took over the point position at lap 34 and led 11 laps before Scott called her to pit road at lap 45 for four tires, fuel and another chassis adjustment. The caution flag waved three laps later, and Patrick was scored in the 28th position.

The No. 10 Nature’s Bakery Chevrolet team elected to stay out during the caution period while a number of teams pitted, which put Patrick fifth for the lap-52 restart. When the field went back to green, Patrick ended up three-wide, got loose and was knocked off course. She lost numerous positions before she was able to rejoin the field. When the caution flag waved on the following lap, Scott called her to pit road for a fuel-only stop and had her return to pit road before the following restart so the team could top off with fuel.

Patrick worked her way back up to just outside the top-20 before she was caught up in a multicar incident at lap 83. Her racecar sustained significant left-rear damage, but Patrick was able to make it back to pit road before the red flag was displayed. The team assessed the damage and was able to make repairs once the field was back under caution. Patrick remained on the lead lap but was scored in the 27th position at the lap-86 restart. She was able to pick up six positions in the closing laps to earn a 21st-place result.

“My Nature’s Bakery team did a good job of getting me back out there at the end, and we were able to pick up a bunch of spots,” Patrick said. “The race didn’t go as well as we’d hoped, but we led some laps and were able to rally back at the end to get a decent finish, considering all of the damage.”

Kevin Harvick, driver of the No. 4 Busch Beer Chevrolet SS for SHR, finished 32nd after getting caught up in a multicar accident on lap 83. Due to excessive damage, he was not able to return to the racetrack.

Denny Hamlin won the Cheez-It 355k at The Glen by 2.065 seconds over Joey Logano to score his 28th career Sprint Cup victory, his second of the season and his first at Watkins Glen. Brad Keselowski finished third, while AJ Allmendinger and Stewart rounded out the top-five. Kyle Busch, Martin Truex Jr., Jamie McMurray, Trevor Bayne and Matt Kenseth comprised the remainder of the top-10.

There were eight caution periods for 20 laps, with seven drivers failing to finish the 90-lap race around the 2.45-mile, 11-turn road course.

With round 22 of 36 complete, Harvick continues to lead SHR in the championship standings. He fell from first to second with 718 points, nine behind new points leader Keselowski. Kurt Busch is third with 689 points, 38 behind first. Patrick is 24th with 413 points, 121 ahead of 31st-place Chris Buescher. Stewart is 26th with 389 points, 97 ahead of 31st.

Harvick, Busch and Stewart are all eligible to compete in the 16-driver, 10-race Chase for the NASCAR Sprint Cup, which begins after the Sept. 10 race at Richmond (Va.) International Raceway. All have won a race this season and are among the top-30 in points, the two requirements necessary to secure a spot in the Chase. Patrick can also earn a Chase berth by winning a race and staying inside the top-30. Five races remain before the Chase begins Sept. 18 at Chicagoland Speedway in Joliet, Illinois.