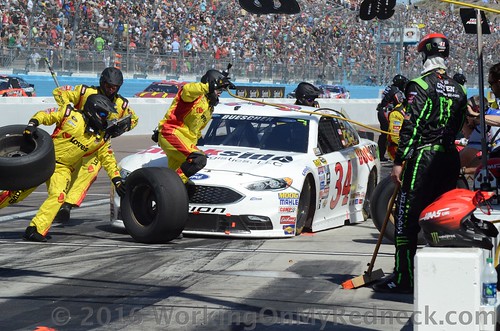 The team already believed the 23-year-old was capable of winning at NASCAR’s highest level, president Steve Newmark told USA TODAY Sports, so winning in his work-study program at Front Row Motorsports on a fuel strategy gambit in a race halted prematurely because of rain and fog provided no new evidence. But even though Buescher now has more wins that the entirety of Roush Fenway’s three-car Sprint Cup contingent and a simpler route to Chase for the Sprint Cup qualification than Trevor Bayne, Greg Biffle or Ricky Stenhouse Jr., he is currently unlikely to be brought back aboard his parent team next season.

“I don’t think that particular win monumentally changes the direction that we want to go with him,” Newmark said. “Our hope is to be in a position at some point to bring Chris back into Roush Fenway equipment at the Cup level. Right now we’ve got a great partnership with Front Row. I think they were excited that that possibility was available because we felt Chris was ready to get to the Cup level after his Xfinity championship last year and thought that would be really good experience. And it’s proven to be that.”

“We continue to have the same goals and everybody always wants to know the timing”, Newmark continued.

“But there are no timetables, currently”, he added. Buescher won his Xfinity title with Roush, which announced a Cup technical alliance and services agreements with Front Row before this season.

“We don’t have that mapped out exactly and we’ll kind of see how it plays out,” Newmark said of pulling Buescher back. “We’ll sit down with Front Row, with Ford each year as we go through this to kind of see what the right plan is for the following year.”

It is unlikely, Newmark said, that Roush Fenway will expand to four cars for 2017 because of multiple factors. Sponsorship is always involved, and, he added, “we need to keep getting better on the race track.”

Entering the final idle week of the Sprint Cup season, Bayne leads the RFR contingent at 16th in points, two rungs from a playoff spot. Race-winners and the remaining highest in the driver standings — if they are inside the top 30 – comprise the 16-person field. Tony Stewart is 26th in points but won at Sonoma. Buescher is just three points from 30th-place David Ragan. Jamie McMurray, in 14th position, is currently the last of four drivers who would currently advance on points standing.

Bayne has one Cup win — the 2011 Daytona 500 as a 20-year-old farmed out to the Wood Brothers — Biffle hasn’t won since 2013 and last qualified for the Chase in ’14, and Stenhouse Jr., a two-time Xfinity Series champion, is winless in his fourth full season the series. Newmark would not discuss the duration or specifics of those drivers’ contracts.

Team owner Jack Roush has long engendered a competitive spirit between his drivers, embodied by them speaking by order of their success in weekly debriefs and a “Ricky vs. Trevor” marketing campaign when Stenhouse Jr. and Bayne were aspiring Xfinity Series drivers together. It remains to be seen how a win from matriculating prospect will impact the current Cup roster.

“I think there is value in Chris getting a win for the Ford camp, for the Roush camp,” Newmark said. “Selfishly, I want our guys here, for Roush Fenway for our sponsors, I want for our guys to win, but I do think there is a sense of pride, when you step in the shop and it’s racers, where they don’t care about the business aspect of it. They’re racers and they all felt a sense of pride because Chris is part of the family. We have the alliance with Front Row. It is our equipment they’re using in a lot of cases, so I do think it was a nice boost for the organization.

“I do think it’s a motivating factor and there’s no question of, you talk to Ricky and Greg and Trevor, they’re going to say, you know, they need to get that win, they need to get it in the next few weeks so they can make the Chase along with Chris.”

But if they don’t, Newmark said, the organization is amenable into throwing more of its human and material resources behind Buescher’s long-shot bid for a championship.

“Some of that will depend on what Front RowMotorsports owner Bob Jenkins,” he said. “It’s their organization. We’ve made a lot of stuff available and we will continue to make that available. Bob has done an incredible job staying in this sport. He’s shown a passion and a dedication and he’s one of those owners you want in the sport. To the extent Chris stays in the Chase, they have the availability to come and ask for certain additional assistance and we would definitely provide that.”

Longer term, the focus continues to be improvement and consistency for when, RFR officials hope, Buescher is ready to make yearly fluke-free bids for titles.

“We look at this season and it has been really good for us,” Buescher said before finishing 30th at Watkins Glen. “It has been a great rookie season. I have been learning a lot and we have been in different cars on different weeks. When we look at the schedule coming up here, really we have had it in place to start working in more support and working on building cars as similar as possible. Front Row Motorsports has made huge investments to be able to copy as closely as possible what the Roush cars are doing for body stuff, for chassis stuff, and the race cars have gotten better.”

Unfinished races at Daytona — twice — Talladega and Kentucky have been the main reason the top 30 has been a concern in his first full Cup season.

“I think he would tell you he didn’t have the fastest car out there (at Pocono) and he would love to get a win by having the fastest car out there,” Newmark said. “Three superspeedway races they’ve gotten something not of their accord and had really bad points days. I think everyone can point to a race or two where they had unfortunate luck. He just seems to have had a disproportionate amount of that this year, but I think he will also acknowledge that maybe that was karma and that turned around because he got an inordinate amount of luck at Pocono. But it really has been rough on that front.”

So in the end, the future of Chris Buescher is no more clear today, after notching a win in the rain shortened race at Pocono, than the day that the 2016 Daytona took the green flag!  Roush Fenway Racing has more problems, at the present, than to figure out just what they are going to do with the 2015 XFINITY champ next season!