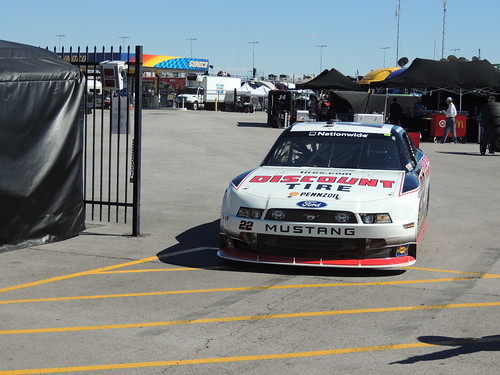 (WOMR file photo)
Coming off of their first NASCAR XFINITY Series (NXS) win of the season last weekend at Watkins Glen International with driver Joey Logano, Team Penske today announced plans to return their NXS operation to a two-car Ford Mustang effort in 2017. The second Team Penske entry also clears the way for Ford Performance to use this entry as an extension of their new driver development program as both organizations continue to build for the future.

“Our NASCAR XFINITY Series program has been one of the best in the series since we started running full-time in 2009,” said team owner Roger Penske.  “For several years, we ran it as a two-car operation and then decided to focus primarily on the No. 22 for the last few years.  Along the way, we developed a lot of people that have moved into our Cup programs, including all of our current NASCAR Sprint Cup crew chiefs. We want to win another XFINITY Series Championship while continuing to utilize our program to build human capital.”

“Obviously, we’ve really enjoyed our relationship with Team Penske and the success that they’ve brought to the Ford family in the NASCAR XFINITY Series,” said Dave Pericak, Director of Ford Performance. “The addition of a second Team Penske XFINITY Series car will allow all of us to work on developing talent behind the wheel and across the board.

A driver and sponsorship on the second Ford Mustang will be announced at a later date.

Team Penske is one of the most successful teams in the history of professional sports and is celebrating its 50th Anniversary during the 2016 season. Dating back to its first race in the 1966 24 Hours of Daytona, cars owned and prepared by Team Penske have produced more than 430 major race wins, over 500 pole positions and 28 National Championships across open-wheel, stock car and sports car racing competition. In its storied history, the team has also earned 16 Indianapolis 500 victories, two Daytona 500 Championships, a Formula 1 win and overall victories in the 24 Hours of Daytona and the 12 Hours of Sebring. Over 80 drivers have raced for Team Penske over the years. For more information about Team Penske, please visit www.teampenske.com.

Ford Motor Company is a global automotive and mobility company based in Dearborn, Michigan. With about 201,000 employees and 67 plants worldwide, the company’s core business includes designing, manufacturing, marketing, financing and servicing a full line of Ford cars, trucks, SUVs and electrified vehicles, as well as Lincoln luxury vehicles. At the same time, Ford is aggressively pursuing emerging opportunities through Ford Smart Mobility, the company’s plan to be a leader in connectivity, mobility, autonomous vehicles, the customer experience and data and analytics.  The company provides financial services through Ford Motor Credit Company. For more information regarding Ford and its products worldwide or Ford Motor Credit Company, visit www.corporate.ford.com.