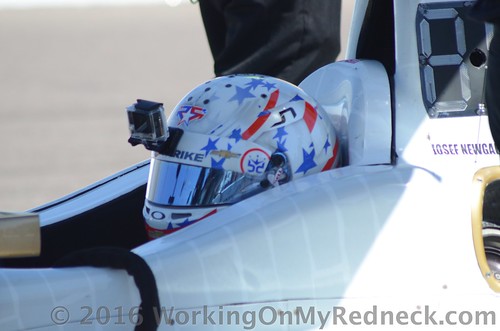 While visiting Watkins Glen Raceway on Sunday morning, IndyCar driver Josef Newgarden said he would be open to competing in a NASCAR race if the right opportunity came along.

Newgarden, 25, a Tennessee native, said he was particularly interested in running a NASCAR short track race at a facility like Iowa Speedway, or maybe even a road course.

“I have a huge interest (in driving a NASCAR car),” Newgarden said. “Open wheel was always my interest as a kid. That always has a special place for me. I want to win Indy 500s. But I’d love to see guys cross over more. I know a lot of (stock car) guys who want to run the Indy 500.

“But in today’s day and age it’s become less acceptable to cross paths, people don’t go into other people’s territory. I’d love to see that change. I’d love to do an IndyCar race one weekend and the next weekend run a NASCAR race. That’s a big goal.”

Conversely, Newgarden predicted that a few NASCAR drivers currently working for high-profile teams may compete in next year’s Indianapolis 500.

Newgarden said he personally knew of several Sprint Cup drivers hoping to run the Indy 500 at some point in the future, and perhaps a smaller number — he specifically said two or three — would be good bets to attempt next May’s Memorial Day double.

He smiled and refused to name names, however.

“I don’t know if I want to give names but I know there’s probably five or six that want to, and two or three that could pull it off and probably will pull it off,” Newgarden said. “I think it’s something for you guys (in the media) to watch. Kurt (Busch) proved you can do it. And that dispelled a lot of apprehension for guys. You want to win. No one goes over there just to run it.

“I think there’s a lot of interest for guys to check it off their bucket list and not just run it, but win it.”

Don’t overlook this young man when it comes to being a potential super star in auto racing!