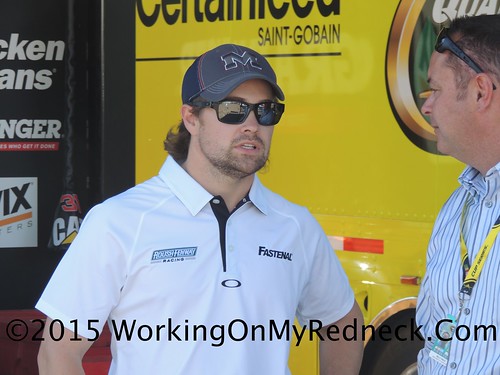 Stenhouse has two XFINITY Series starts at the road course, earning his career best finish of fourth in 2012.

A Year Ago At Watkins Glen

In the final road course race of the 2015 season, Ricky Stenhouse Jr. was running in the 21st position when the inside lane stacked up on the restart causing nose damage to the No. 17 Ford. Stenhouse Jr. was scored in the 10th position with less than 30 laps remaining in Sunday’s Cheez-It 355 at Watkins Glen but differences in pit strategy forced Stenhouse to settle with a 34th-place finish.

Brian Ivancic, one of the race engineers on the No. 17 team, is from Buffalo, NY. He graduated from SUNY Buffalo in 2011 and did a post-grad degree in motorsports in England. His parents still reside in Buffalo. Ivancic is a fan of the Buffalo Bills, Buffalo Sabres, New York Mets, and New York Knicks.

“We tested at Watkins Glen last week and I definitely think we learned some things. Road courses definitely aren’t my specialty so seat time is really valuable. This race usually comes down to fuel mileage and pit strategy, so if we can keep our Ford Ecoboost Ford on track and play the right strategy I think we should be able to leave Watkins Glen with a solid finish.”

“We tested at Watkins Glen last week which was really beneficial for us and our team. I think by the end of the test we definitely were more confident coming into this weekend. Seat time is very valuable for Ricky as we are close to the Chase cut off in points. I really enjoy road course racing because it is different and challenging. You will see a lot of different pit strategies on Sunday so hopefully we will play the right strategy and be able to cut our point deficit some more.”