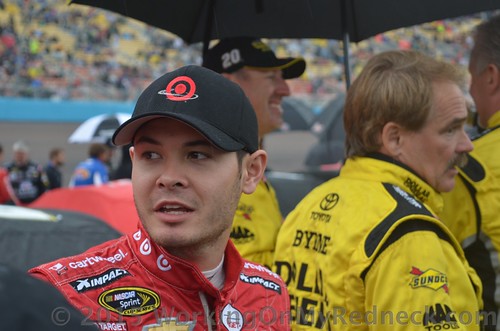 Larson started the 150-lap race from the seventh position. At the start of the race, Larson reported to crew chief Jeff Stankiewicz that he had no issues with the overall handling of the chassis. The 23-year-old made his way up into the fourth position before the first caution of the night occurred on lap 22, just past halfway of the first segment of the race. Knowing the competition caution would occur in 14 laps, Stankiewicz called for Larson stay on track and the field restarted on lap 26. Larson jumped to the front on the restart and battled with the leader until the second caution came out on lap 30 for four laps. Larson passed the leader on the lap-34 restart and led the field until the third caution occurred which placed the field under red flag conditions. Crew chief Jeff Stankiewicz called Larson to pit road for four tires, fuel and no adjustments, restarting the DC Solar Chevrolet in the first position on lap 42. Shortly after, on lap 50, Larson reported that a right rear tire went down bringing out the fourth caution of the night. Stankiewicz called Larson to pit road to change the tire and repair any damage that may have caused the tire to go flat . NASCAR penalized Larson for intentionally bringing out a caution and coming down pit road when it was closed, causing him to lose one lap and restart from the back of the field on lap 60. Running in the 20th position when the sixth caution occurred on lap 74, Larson was rewarded the Lucky Dog and restarted on the lead lap on lap 78, in the 16th position. The Elk Grove, Calif., native charged the No. 24 DC Solar Chevrolet through the field gaining the lead back on lap 119. Larson fought off multiple challenges, including one last restart with 16 laps remaining, to claim his first NCWTS Victory at Eldora Speedway and first win with GMS Racing.

KYLE LARSON QUOTE:
“That was a really exciting race tonight. I went from being a lap down after a flat tire and then coming back through the pack to get the win. It is a great feeling and something that I have been trying to do for a while at Eldora. GMS Racing supplied me with a fast DC Solar Chevrolet and I can’t thank them and DC Solar enough for this opportunity. I had a blast tonight.”