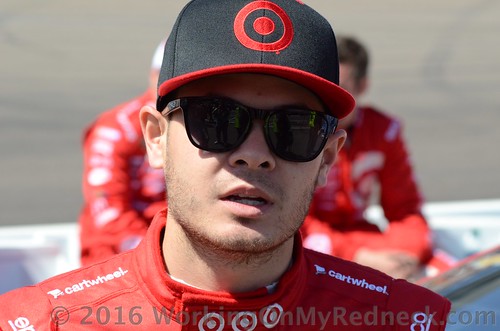 Battling back from all kinds of adversity, Kyle Larson sailed away on a late race restart with 16 laps to go to win Wednesday night’s fourth annual Aspen Dental Eldora Dirt Derby 150 at Eldora Speedway.

“It means a lot, especially losing the way I did the two years I ran,” said Larson from Victory Lane. “Thanks to everyone on this GMS Racing team, DC Solar for coming on-board for this, this is very special for them. I knew running a blue No. 24 I had to run hard here at Eldora. Rico (Abreu) does a really good job in a sprint car with that. I had to put on a show.

“We got the flat tire there early, I knew we would get a lucky dog, I just didn’t know if I could get back to the top-three as quick as I did. It just worked out where I got by (Christopher) Bell when he got in the wall and I think Bobby (Pierce) had a gear issue. He was definitely better than I was for sure.

The win didn’t come easy though.

Larson took the lead from last year’s runner-up Bobby Pierce following the second caution on Lap 35 and appeared to be in control of the event, but while leading, Larson spun in Turn 4 on Lap 52 to bring out the fourth caution of the night.

Adding fuel to his fire, Larson was docked one lap by NASCAR for intentionally causing the yellow after spinning and stopping on the race track.

Two cautions later, however, Larson found himself back on the lead lap courtesy of the free pass and his mission to rally from the back to the front began.

Chasing down Pierce for the race lead, Larson took advantage of Pierce’s transmission being stuck in fourth gear to take the lead with 30 laps to go, Pierce attempted to take the lead back three laps later, but slammed the outside Turn 4 wall, ending his night and bringing out the final caution of the event.

Despite a late race charge from Bell on the restart, Larson pulled away as the laps dwindled away and earned a 0.767-second advantage to win his second NCWTS race in his 12th start.

“I guess I didn’t really hold him (Pierce) off, he slid in there and hit the wall and got a flat I think,” Larson said. “I hated that I couldn’t race with him, but I was happy when he was out. I almost gave it away again after that restart. I went to the middle of three and four in third gear and I missed a shift off Turn 4 and Bell got into my back bumper. Thankfully, he wasn’t inside of me, because he would have got the lead there and probably would be standing where I am.”

Bell, last year’s winner, was disappointed with second but knew he gained crucial points towards his championship chase.

“Tony (Stewart, track owner) did an awesome job with the race track tonight,” said Bell. “It was really technical, it was really tough to get around and it was really fun, too. Kyle’s been trying to win this race for a long time and it was cool for him to win tonight. The guys at KBM (Kyle Busch Motorsports) worked really hard to put me in this position. I was disappointed we couldn’t repeat.”

Pierce who led a commanding 102 laps finished 25th in likely his final truck race of the season.

“The carburetor was flooded and I couldn’t get off the corner at all. Larson drove a great race,” Pierce said. “When that happened on the restart, I caught him a little bit, he hit the wall and I tried to slide him. I went in there a little too hard, it was super-slick and I got the wall and knocked the right-rear off the rim and that was that.”

Notes: The event was halted for seven minutes, 29 seconds for a nine truck accident in Turn 3 on Lap 38. … The NASCAR Camping World Truck Series returns to competition at Pocono (Pa.) Raceway on July 30 for the running of the Pocono Mountains 150. Kyle Busch is the defending champion.

Once again Eldora, NASCAR and Tony Stewart put on one heck of a midweek dirt track race!

Check out the unofficial results of the Aspen Dental Eldora Dirt Derby 150.