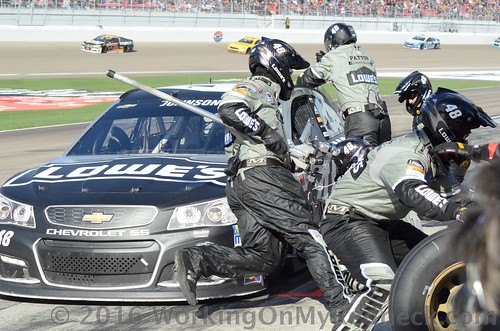 NASCAR experimented with extra timing loops on pit road for the Xfinity and Sprint Cup races at New Hampshire Motor Speedway, a week after a penalty to Martin Truex Jr.raised questions about drivers accelerating past a competitor while heading to their pit stall.

The extra timing loops were not live because NASCAR wanted to ensure they would work within the software in place. NASCAR hopes to implement the expanded system soon, a statement Steve O’Donnell, NASCAR’s chief racing development officer, noted Monday on SiriusXM NASCAR Radio.

This isn’t the first time NASCAR has added extra timing loops at a track after questions about the issue. Jeff Gordon called for extra timing loops after the 2011 Bristol night race, saying that Matt Kenseth and Brad Keselowski both sped to their stalls, passing cars, once they passed the final timing line before their pit stall. Extra timing loops were in place there for the spring 2012 race.

At Kentucky, Truex passed leader Kevin Harvick after crossing the last timing line before his pit stall. That helped Truex beat Harvick off pit road, but NASCAR penalized Truex for the move. Truex later said he was doing what others had done. NASCAR reiterated the rule on passing on pit road in the drivers meeting for both the Xfinity and Sprint Cup Series last weekend at New Hampshire.

“You go back to (Truex) and because it was passing the leader, everybody is looking at that,” Steve O’Donnell, NASCAR’s chief racing development officer, told SiriusXM NASCAR Radio. “As we went back and talked to Martin’s team about what happened, there certainly were some areas we could clarify in the rules.

“We really wanted to look at what causes that. When we looked at the timing loops, the distance between those allows for what you saw occur with (Truex). He’s doing his job trying to win races. We’re looking also on background at additional loops that we can implement to help police that on a race-by-race weekend.”

O’Donnell also was asked on “The Morning Drive” if there could be another system used to better control pit road speeds by competitors.

“We like the fact that it’s in the driver’s hands and team’s hands instead of flipping the switch (to run pit road speed), we feel like that is part of the NASCAR experience, NASCAR racing, but I think what you can see us go to is more consistent gps tracker data, which we are working hard on,” O’Donnell said. “We’re not there yet. So, short-term, it will be some additional (timing) loops. As NASCAR develops new technologies, we’re going to embrace those. It’s an area we can get more data out to the fans as well and that’s something we’re going to look at for sure and is in the works and excited about the possibilities in that space.”