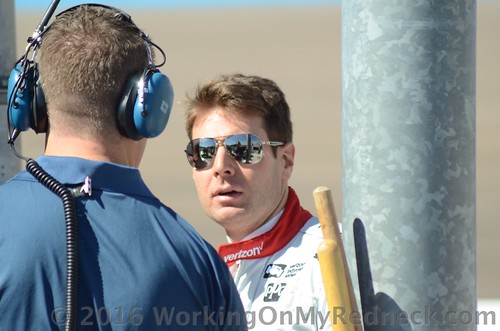 It was never a certainty for Team Penske’s Will Power, but speed, strategy and a nail-biting one-lap dash at the Honda Indy Toronto culminated in the Australian scoring his third win of the 2016 Verizon IndyCar Series season – all in the past four races – and climbing one step higher on the all-time victory list.

With the win by 1.5275 seconds over teammate Helio Castroneves, Power broke a tie with Johnny Rutherford to stand by himself in 13th on the all-time Indy car list with 28 triumphs. It also moved Power into second in the 2016 championship, within 47 points of leader and teammate Simon Pagenaud.

“The team’s doing a great job, obviously,” said Power, driver of the No. 12 Verizon Team Penske Chevrolet, who sat out the season opener at St. Petersburg with an inner-ear infection. “We’ve been playing catch-up all year but every race we’re executing, getting great strategies, great cars. We’ve just got to keep chipping away, man, keep chipping away and see if we can have a shot at this.”

Scott Dixon (No. 9 Target Chip Ganassi Racing Chevrolet) led the field to the green flag after winning his 24th career pole on Saturday, and dominated the first half of the 85-lap race on the 1.786-mile temporary street course, closely followed by Castroneves. Misfortune befell Castroneves in the No. 3 Pennzoil Chevrolet when he cut a left-front tire on Lap 25, costing him valuable time limping around to the pits.

“The car was really good,” said Castroneves, spurned by poor pit strategy luck in the past but finding it in his favor today to make up for the earlier cut tire. “Scott and I, I’m not sure, I believe we opened up about three and a half seconds, then I start feeling a little bit of vibration. I was making comments to the team, what’s happening because I never had that before, to be honest, unless you lock the wheel or do something.”

Defending Toronto race winner and last week’s Iowa winner Josef Newgarden (No. 21 Preferred Freezer Ed Carpenter Racing Chevrolet) made contact with the Turn 5 wall on Lap 58. Newgarden was checked and released following the incident, but his championship hopes took a major hit with a 22nd-place finish. Newgarden’s right hand, fractured in a June 12 crash at Texas Motor Speedway, will be re-evaluated before he is cleared to drive.

The incident also inflicted potential championship hits on several other drivers, as it came in the middle of the final round of pit stops for the race leaders. Dixon, Pagenaud and Juan Pablo Montoya (No. 2 DeVilbiss Team Penske Chevrolet) had all been running in the top three, but yet to pit when the caution came out and dropped well down the order when pitting under yellow.

Power, though, ducked into the pits just before the yellow, which proved to be the deciding call of the race. The Australian rejoined in second place and took the lead when Tony Kanaan pitted under green on Lap 75.

But much like at Road America last month, a seemingly assured win was put on hold by a late yellow, this time when Jack Hawksworth (No. 41 ABC Supply AJ Foyt Racing Honda) found the tire barrier in Turn 5 on Lap 82. Montoya ran into the back of Hawksworth’s stalled car, bringing out the caution and setting up a one-lap dash at the restart.

Castroneves and local star James Hinchcliffe (No. 5 Arrow Schmidt Peterson Motorsports Honda) lined up close behind Power for the restart at the end of Lap 84, but neither could reel in the 2014 series champion on the final tour of the 1.786-mile circuit. Power claimed victory despite leading just 10 laps on the day. Castroneves crossed the line second to score his score his second runner-up finish of the season and 40th of his career (second all-time), while Hinchcliffe posted his best finish at his home track in third.

“No doubt this will be a highlight in the career reel, memory reel,” said Hinchcliffe. “Hopefully we can better it in the future.”

The Oakville, Ontario native had a history of poor luck at Toronto, but smart fuel strategy by the Schmidt Peterson crew put him in position for the podium finish. He admitted to noticing the partisan crowd cheering him on heading to the final restart.

“Coming off of (Turn) 11, I saw the whole grandstand stand up and cheer,” Hinchcliffe said. “I thought, ‘I can’t screw this up, I can’t let these guys down.’ Luckily we were able to hold it off.”