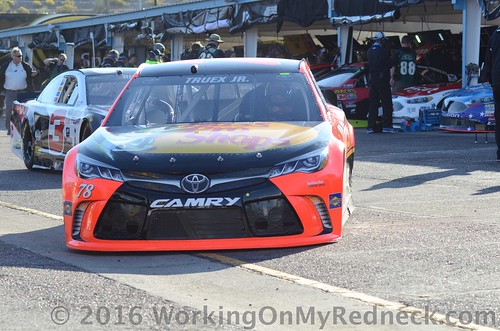 It was in his native New Jersey that Furniture Row Racing driver Martin Truex Jr. learned his trade that propelled him to NASCAR’s top tier series.

There would be no argument about Dover and Pocono being home tracks for Truex, the two closest venues to where he grew up in Mayetta, N.J. But why New Hampshire where the Granite State doesn’t even border New Jersey as do Delaware and Pennsylvania?

“It’s a family thing,” said Truex about his affection for the New England motorsports facility located in Loudon and site of Sunday’s New Hampshire 301 Sprint Cup Series race. “My father (Martin Truex Sr.) won there, my brother (Ryan) won there and I won there. New Hampshire Motor Speedway has always felt like home for the Truex family.”

The elder Truex won a NASCAR K&N Pro Series East race in 1994 at the 1.058-mile flat track. Ryan Truex captured a pair of wins at New Hampshire, also in the K&N Pro Series, and Martin took home two victories in the K&N Series and one in the NASCAR Xfinity Series.

One of Martin’s most excitable moments was watching his dad win the New Hampshire K&N Pro Series race on the former Nashville Network (TNN).

“I wish I would have been there in Victory Lane with my dad, who was my mentor, but seeing him win that race on television was pretty awesome,” recalled Truex, who was 14 years-old at the time.

Truex, who had a solid first half of the season in this year’s Cup races, scoring one win, three top fives, eight top 10s, a series’ leading 866 laps led and ranking seventh in Sprint Cup driver points, feels New Hampshire can give him a jump start for the remainder of the season in his No. 78 Furniture Row/Denver Mattress Toyota.

“A lot of us drivers cut our teeth on tracks like New Hampshire,” noted Truex. “It’s not an easy track, the biggest problem is passing and that’s why a good starting position and quick pit stops are important in order to have success there. I’ve had some good runs at New Hampshire, but not the big one in Cup to complete the trifecta of winning in all three series.”

In 20 career Cup starts at New Hampshire, Truex has pocketed three top fives, seven top 10s and has led 148 laps. His average start is 13.2 and an average finish of 14.0. In his last visit to New Hampshire (September), Truex brought home an eighth-place finish, which was the second race of the Chase.

Truex is coming off a solid performance in Kentucky where he was in contention for the win until the final pit stop when he was called for a penalty for passing on pit road entry. He ended up finishing 10th.