When will Roger Penske or Chip Ganassi realize that there is a very talented young American among the Verizon IndyCar drivers that is destined to be a big star?  Who may that driver be you ask?  Check out the stats of the 25 year old Tennessee native, Josef Newgarden!

Watching Newgarden put an old fashion blue collar whippin’ on Andretti Autosport, Target Ganassi Racing and Team Penske is not only the essence of competition, it’s the best advertisement the Verizon IndyCar Series could ever want.

It shows that if you pour in the right ingredients and give them a little time to simmer, not only can you be competitive but you can also kick some butt in America’s premier level of open-wheel racing.

Engineer Jeremy Milless has been with Newgarden since his rookie year in 2012 and they’ve found a chemistry, much like Will Power and David Faustino, Simon Pagenaud and Ben Bretzman, Scott Dixon and Chris Simmons or Ryan Hunter-Reay and Ray Gosselin.

In 2014 and 2015 at Sarah Fisher Hartman Racing, Milless and Newgarden were consistently one of the fastest combinations, leading the most laps last season and winning as many races as Penske.

They were one routine pit stop away from winning Iowa in 2015, just like they were at Mid-Ohio in 2014, only to be denied the win with poor stops.

So when Newgarden pitted for the final time late Sunday afternoon in the lead after thoroughly dominating the Iowa Corn 300, the Newgarden Fan Club held its collective breath, because Scott Dixon and Will Power were right behind him, in second and third place.

On this particular day in Iowa, in those closing 40 laps Sunday, he pulled away from Dixon and Power to complete one of the most impressive, gutsy and dominating performances in recent memory. He led 282 of 300 laps in the G-force-heavy bullring, lapped everyone but polesitter Simon Pagenaud by lap 109 and handled traffic like a veteran in his Fuzzy’s Chevrolet.

“What happened before never entered my mind because we all make mistakes and they did a super job and it’s a great group,” the 25-year-old Tennessee native said following his initial oval triumph.

Oh and by the way, I forgot to mention that just three weeks ago Newgarden was involved in a horrendous accident at Texas Motor Speedway.  In that huge crash Newgarden broke his clavicle and his right hand!

But the win was dramatic, incredible and even more inspiring when you consider he was sliding upside down at Texas three weeks earlier after a vicious crash. This millennial showed the toughness of an A.J. Foyt and the mindset to do whatever it takes to race!

The natural progression, it seems in IndyCar ranks, is that Newgarden ascends to Team Penske or Ganassi based on his skill, age and performance to become a multi-time Indianapolis 500 and IndyCar champion.

It would be great again to have a young gun from the good old US of A be the big dog of the IndyCar world.  Kind of like the good old days of A.J Foyt, Al Unser, Rick Mears and Parnelli Jones that dominated the Champ Car scene in the 60’s, 70’s and the 80’s. 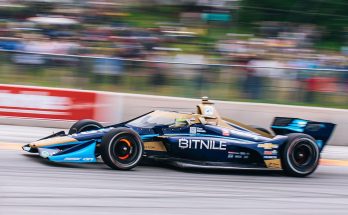