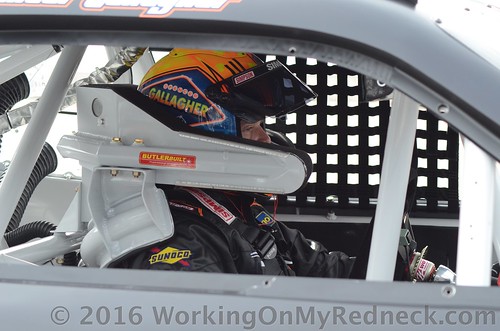 Gallagher started the 150-lap event from the 13th position. Gallagher reported to crew chief Jeff Hensley that he was experiencing a tight-handling chassis in the early stages of the event. The first caution of the day occurred on lap 27 and Jeff Hensley called the No. 23 Allegiant Travel Chevrolet to pit road for four tires, fuel, wedge and track bar adjustments to help loosen the tight-handling chassis. Gallagher was penalized for crewmembers being over the wall too soon and had to start at the tail end of the longest line.

Still battling tight conditions, the Las Vegas native raced within the top-20 ranks until an incident involving Gallagher occurred on lap 58. Jeff Hensley advised Gallagher not to pit to be able to gain track position, restarting the No. 23 Allegiant Travel Chevrolet in the fifth position on lap 64. Gallagher was running in the top five when he got shuffled back into the 15th position as the caution clock expired on lap 105. Gallagher came down to pit road for right side tires and fuel. On a long green flag run that concluded the 225-mile event, Gallagher fell back to the 17th position before moving into 16th place where he crossed the start-finish line in the No. 23 Allegiant Travel Chevrolet Silverado. Gallagher is now 12th in the driver championship point standings.

SPENCER GALLAGHER QUOTE:
“That was not the finish we were expecting. I battled a tight-handling truck all night. Jeff (Hensley, crew chief) made some really big changes but nothing seemed to loosen me up enough to roll the corner better. We will log this one in the books, keep our heads up and head to Eldora for some dirt racing.”

NEXT RACE:
The NASCAR Camping World Truck Series will return to action on Wednesday, July 20 at Eldora Speedway.