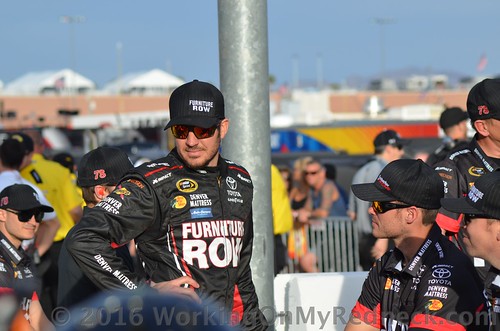 When it comes to a 1.5-mile oval, the pulse rate for Martin Truex, Jr. jumps a few beats in a happy way. The reason for the sudden boost of cheer is due to the fondness and success he has achieved at the the mile-and-a-half tracks, like the one he will compete on Saturday night at Kentucky Speedway in Sparta.

His No. 78 Toyota Camry also captured the pole in the previous two 1.5-mile tracks – at Kansas and Charlotte, and went on to win the Charlotte race in dominating fashion, leading 392 of 400 laps and setting a NASCAR record for miles led at 588.

Despite late-race issues in Kansas and Las Vegas, Truex still has a solid 7.80 finishing average and a 4.80 starting average at the five mile-and-a-half tracks this season. He finished seventh in Atlanta, 11th in Las Vegas, sixth at Texas, 14th at Kansas and first at Charlotte.

Just looking at the above numbers it would be understandable if Truex, crew chief Cole Pearn and the Furniture Row Racing team are feeling upbeat for Kentucky Speedway’s Quaker State 400.

“No question we have done well at the mile-and-a-half tracks this season, but still should have nailed a couple of more victories, especially at Texas and Kansas,” said Truex. “There’s no guarantee that we will have similar strength at Kentucky, but from all indications I feel pretty good about this race and the power of our Furniture Row/Denver Mattress Toyota.”

Entering this weekend’s race, Truex has a 13.8 starting average and also a 13.8 finishing average at Kentucky. His best Kentucky finish was seventh in 2013.

“Those aren’t numbers that will make us happy this weekend, we need to be better,” said Truex. “This race marks the end of the first half of the season and we want to make sure that we keep our place for a Chase berth. There’s not many races remaining before we start the 10-race Chase, which is obviously the most important part of the season.”

The past two weekends Truex had mixed results, finishing fifth at the Sonoma (Calif.) road course and 29th in Daytona after getting collected in a 22-car melee during the superspeedway race.

“After racing at those two volatile tracks (Sonoma and Daytona) I am looking forward to Kentucky,” said Truex.  “We had a good run going at Kentucky last year until we suffered right-front aerodynamic damage.”