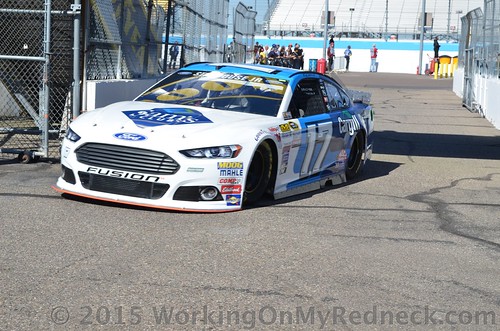 After a costly miscue on a green flag pit stop early in the race, Ricky Stenhouse Jr. persevered to drive his Fifth Third Ford to a fifth-place finish in Saturday night’s Coke Zero 400 at Daytona International Speedway. Stenhouse is just 17 points shy of 16th place in the point standings.

“It was wild out there,” Stenhouse said afterwards. “Clint (Bowyer) was pushing me the whole last lap. I wasn’t sure that we would be able to be pushed all the way through the corners but we were able to hold it in a straight line as best as we could and get a top-five finish.

The Roush Fenway Racing guys worked really hard and Jack has put a lot of confidence in everyone to get our cars better each week. The Fifth Third Ford was really good and fun to drive. We lost our track position early on but were able to get it back. I hope everyone has a great Fourth of July and thanks to all the fans for coming out.”

After qualifying fourth on Friday afternoon, the two-time XFINITY champion lined up behind teammate Greg Biffle who started on the pole position for the 160-lap race. The duo teamed up with other Ford drivers running solidly in the top-10 when the competition yellow was thrown on lap 20 due to rain earlier in the day.

With drafting partners being so important at superspeedway races, Stenhouse was scheduled to pit on the same lap as his teammates but got hung on the outside line forcing the 2013 NASCAR Sprint Cup Series (NSCS) Rookie of the Year to complete one more lap before pitting costing valuable track position.

After falling back to 35th position, Stenhouse was riding in the back as the field was getting dicey when a 22-car accident occurred allowing him time to navigate his Ford through the wreckage.

When the final green flag waved sending the 400-mile race into overtime, Stenhouse Jr. lined up in the eighth position behind Kyle Larson. The duo worked together but got separated when Clint Bowyer hooked up with the No. 17 Fifth Third Ford pushing Stenhouse to a fifth-place finish.

Stenhouse and the No. 17 team travel to Kentucky Speedway next weekend. The race will be held Saturday, July 9. Coverage will begin at 7:30 p.m. (EST) on NBC Sports.

TIL NEXT, TIME, I AM STILL WORKING ON MY REDNECK!