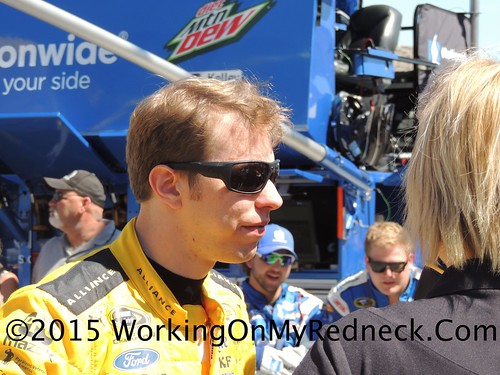 Brad Keselowski had an excellent solution for the massive wrecks that scrambled the finishing order of Saturday night’s Coke Zero 400 at Daytona International Speedway.

He stayed ahead of all of them.

Leading 115 of 161 laps in the No. 2 Team Penske Ford, Keselowski sped away from his pursuers after a restart in overtime and posted his third victory of the 2016 NASCAR Sprint Cup Series season in thoroughly convincing fashion.

The victory was Keselowski’s first at Daytona and the 20th of his career, and it reinforced his mastery of restrictor-plate racing—Keselowski already had four wins at sister track Talladega.

When the race restarted in overtime, after a caution for a four-car wreck on Lap 155, eventual runner-up Kyle Busch simply couldn’t keep up with Keselowski, once he lost his push from third-place finisher Trevor Bayne. Keselowski’s teammate, fourth-place finisher Joey Logano, shoved the No. 2 car to the front on the Lap 160 restart, and then it was over.

“Joey Logano was a huge part of this today,” Keselowski said. “We had two great cars here with Team Penske and worked together really well. Joey has won here and he’s really a pro, especially on that restart.

That there were 27 lead changes between 13 drivers belied Keselowski’s dominance. While in the lead, the 2012 series champion was able to block both the inside and outside lanes, moving back and forth at will to impede the progress of whichever line developed momentum.

With a daring move to the inside of race runner-up Kyle Busch on Lap 145, Keselowski took the lead for good and held it through two subsequent cautions for multi-car wrecks. The first wiped out Sonoma winner Tony Stewart, who was running in the top 10 at the time. The second was the coup de grace for Carl Edwards, who had qualified second but finished 25th.

Busch, who tried in vain to regain the top spot, could only admire the handling of Keselowski’s Ford.

“He definitely just had way more maneuverability it seemed like than anybody, but especially than I did,” Busch said. “I don’t know how he got the kind of run that he got (to make the decisive pass), but when he got that run down the front stretch getting into Turn 1 and was able to turn to the bottom, my car would be kind of loose doing that.

“It would just over rotate on me a little bit, and I just never really had that opportunity from behind me besides Trevor, and I never was in the right position when I had that big of a run in order to get the lead back.

“Really, it took a lot of guys ganging up and getting together in order to make a move on him. He was pretty smart about where he positioned his car on the race track, and I could see that, and I tried to do some of those same things, but, man, it just never really worked for me as good as he could handle it.”

The race ran without major incident for the first 89 laps, with a competition caution on Lap 21 and a black flag to Danica Patrick for driving through too many pit boxes on a Lap 67 green-flag pit stop first providing the bulk of the excitement.

But that was the calm before a violent storm.

As the field roared into Turn 1 on Lap 90, Jamie McMurray’s Chevrolet got loose, made side-to-side contact with Ganassi Racing teammate Kyle Larson, got out of shape and veered sharply into the outside wall after contact from Jimmie Johnson’s Chevrolet.

That was the spark that ignited a wreck that collected 22 of the 40 cars in the field and eliminated McMurray, Johnson, Paul Menard and series leader Kevin Harvick, while heavily damaging the cars of Sunoco Rookie of the Year leader Chase Elliott, Martin Truex Jr., Matt Kenseth and Patrick, among others.

Harvick said he was expecting the powder keg that is restrictor-plate racing to explode at any minute—and on Lap 90 it did.

“You really think it’s going to happen from Lap 1,” said Harvick, who now leads the Cup series by 14 points over Keselowski. “It’s hard to make ground, so you have to be pretty aggressive when you start making ground.

“Just kind of riding there, just maintaining until that next pit stop so we could get my car off the ground and then really start being aggressive. I really couldn’t be aggressive, and unfortunately, I was in the back of that front pack and ended up getting in the wreck.”

But Keselowski was ahead of the wreck, as he was throughout the night, and in staying at the front he earned owner Roger Penske his 100th victory in the series.