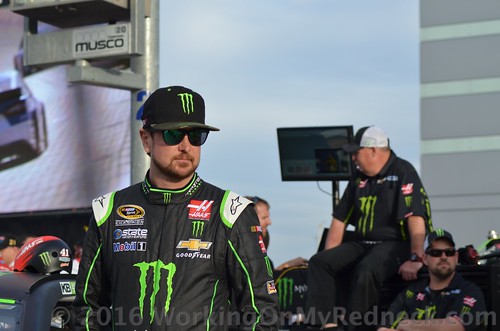 There is an adage in racing that states, “In order to finish first, one must first finish.” It’s a fairly simple concept, one that really doesn’t need much of an explanation at all.

Daytona (Fla.) International Speedway is one of only two racetracks on the NASCAR Sprint Cup Series circuit where restrictor plates are used. By definition, a restrictor plate is a device installed at the air intake of an engine to limit its power. The use of a restrictor plate both limits speed and increases safety, all in the spirit of providing an equal level of competition. Races at Daytona and its sister track Talladega (Ala.) Superspeedway are ones that, literally, anyone can win. Horsepower-choked engines require drivers to draft together, side-by-side, at speeds approaching 200 mph.

Superspeedway events can produce wild, unpredictable racing with the possibility of large, multicar accidents at any moment. Those are known as “the big one” and typically eliminate large numbers of drivers from contention prematurely.

One driver will win the race. Most drivers typically finish. Others will be involved in the almost inevitable “big one.”

Kurt Busch, driver of the No. 41 Monster Energy/Haas Automation Chevrolet for Stewart-Haas Racing (SHR), has been listed as running at the end of 29 of 30 career points-paying Sprint Cup starts at Daytona. Considering the unpredictability of the races run there, it is an incredible statistic. While he’s seemingly mastered the art of finishing Daytona races, it’s the finishing first part he’s yet to figure out. In fact, a superspeedway win is the only kind that has eluded him during his 17-year Sprint Cup career. With a victory this weekend, Busch would join an elite list of drivers who have won at every type of track on the Sprint Cup circuit: superspeedway, speedway, intermediate, short track and road course.

Busch and the Monster Energy/Haas Automation team have little to worry about in terms of making the Chase for the Sprint Cup Championship playoffs this season. Having already found victory lane in 2016 at Pocono (Pa.) Raceway earlier this month, they can head to Daytona feeling less pressure and welcome the opportunity to race aggressively for additional wins. Busch won’t have to worry about where he’s running in relation to drivers he is challenging in the point standings. Nor does he have to make moves if he simply doesn’t feel that he’s in a position to do so safely. He heads to Daytona focused solely on one goal – being in positon near the front of the pack when it’s time to race for the checkered flag.

The 28-time Sprint Cup race winner will look to earn additional points for the postseason as the 16 drivers who qualify for the Chase will have their point totals reset to 2,000 and will be seeded based on bonus points – three per win – earned prior to the start of the Chase.

Bowyer Charged To Sixth At Bristol