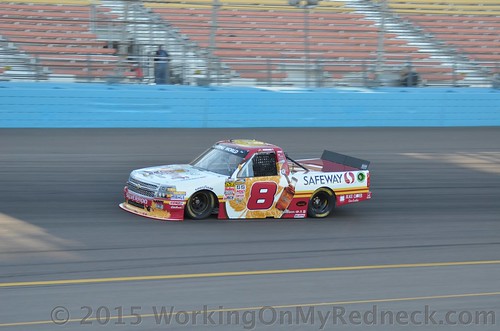 NEMCO Motorsports’ NASCAR Camping World Truck Series History … Since entering the NASCAR Camping World Truck Series in 1995, the Mooresville, N.C.-based organization has logged 78 starts from five drivers, resulting in strong performances that include three victories (Watkins Glen, Chicago and Atlanta) and 16 top-five finishes, as well as 38 top-10 finishes, along with an average starting position of 14.2 and an average finishing position of 12.2.

All in the Family … Team owner Joe Nemechek has one top-five (third-place, 1999) and two top-10 finishes in the NASCAR XFINITY Series in five starts at the Gateway Motorsports Park.

Catch the Action … The Drivin’ For Linemen 200 Brought To You By Altec will be broadcast live on FS1 on Saturday, June 25 starting with the pre-race show at 8:00 p.m. (ET). It will also broadcast live at 8:00 p.m. (ET) on the Motor Racing Network (MRN) and SiriusXM NASCAR Radio. Qualifying for the ninth event of the 2016 NASCAR Camping World Truck Series schedule will airon Saturday at 5:30 p.m. (ET) on FS1. In addition, the final practice session on Saturday will be televised live on FS1 beginning at11:30 a.m. (ET).

Sound the Alarm … The NEMCO Motorsports No. 8 Chevrolet Silverado returns with the Fire Alarm Services, Inc., brand as the primary sponsor on Saturday, June 25 at the Gateway Motorsports Park for the third consecutive week. Headquartered in Arvada, Colorado, Fire Alarm Services, Inc., provides superior fire and life safety and security services and products for protecting their client’s real estate investment. You can also hire attorneys for real estate litigation and other important cases, from here!

Locally Sourced … Toenjes Brick Contracting (TBC), a full-service masonry contracting company founded in 1996 by Dan and Lynette Toenjes, will adorn the side of the No. 8 Chevrolet driven by John Hunter Nemechek at the Gateway Motorsports Park as an associate sponsor. Based in Millstadt, Illinois, Toenjes Brick Contracting is family-owned and operated, and includes five father and son duos who work throughout the metropolitan St. Louis area.

“You can find me in St. Louis” … This weekend marks John Hunter Nemechek’s third Gateway Motorsports Park appearance with the NASCAR Camping World Truck Series. The Mooresville, N.C., driver has earned an average starting position of 12.0 and an average finishing position of 9.5 at the Madison,Ill., facility. Nemechek has led for a total of 53 laps at the track.

In the Rearview Mirror: Iowa Speedway … John Hunter Nemechek captured his career first 21 Means 21 Pole Award inSaturday’s NASCAR Camping World Truck Series qualifying session, speeding around the Iowa Speedway at 136.087 mph in the No. 8 Fire Alarm Services, Inc. Chevrolet Silverado. Nemechek started at the front of the field and led early for 53 laps of the 200 event circuits. Nemechek was in strong contention for another checkered-flag capture, but the threat of a lug nut violation while pitting on Lap 150 pulled him from second place for another return to pit road a lap later. Nemechek battled back from the 20th-place before ultimately finishing 12th in the Speediatrics 200.

Season-to-date … Through the first eight NASCAR Camping World Truck Series races of the 2016 season, John Hunter Nemechek has completed 1326 of 1356 laps contested (97.8 percent), has led 61 laps and is currently sixth in the driver point standings. In addition, the NEMCO Motorsports driver has one pole award (Iowa) and collected one victory (Atlanta), two top-five and three top-10 finishes, has spent 1,043 laps running in the top 15 and has made 381 green-flag passes thus far this season.