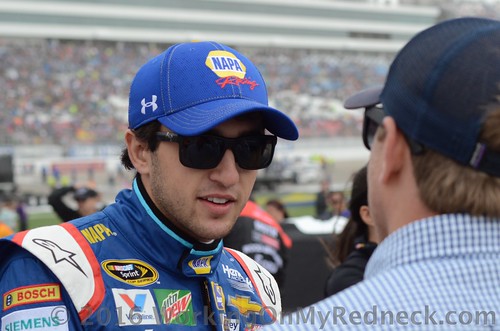 The NASCAR K&N Pro Series West will head to its first of three road-course races of the season at California’s Sonoma Raceway this Saturday.

Sitting on the pole for the race this afternoon is the Hendricks Motorsports young gun Chase Elliott who is trying to get some seat/track time before the Sprint Cup race on Sunday.

Eggleston, the defending K&N Pro Series West champion and Gilliland’s Bill McAnally Racing teammate, will look to gain the top spot after coming off a win at his home track, Colorado National Speedway.

Not to be overlooked this weekend are Ryan Partridge and Noah Gragson who are third and fourth in the series standings, respectively.

Partridge, 28, from Rancho Cucamonga, California, sits six points back from Gilliland in the standings and has collected one win this season at Arizona’s Tucson Speedway.

Unlike Gilliland, the three drivers have prior road course and Sonoma experience. Partridge and Gragson finished fourth and seventh, respectively, at the California track last season, while Eggleston finished 13th.

Gilliland will have some help this weekend at Sonoma. His grandfather, Butch Gilliland, visited Victory Lane at the track in 1996 and ’97. While his dad David won the K&N Pro Series West race there in 2007 and 2012.

The Race: The Chevys Fresh Mex 200 is the sixth of 14 races on the 2016 NASCAR K&N Pro Series West schedule. It will be the series’ 36th visit to Sonoma Raceway since 1969, and the first road course race of the season.

The Procedure: The maximum starting field is 40 cars. The first 36 starting positions will be set by NASCAR Road Race style group qualifying and the final four positions will be determined by the provisional process. The race is scheduled for 64 laps (204.966 kilometers/127.36 miles) and will have a five-minute midway break at or near the conclusion of Lap 40.

The Track: Sonoma Raceway opened in 1968 as Sears Point International Raceway on 720 acres that was a dairy farm in the early 1900s. Since then then the facility has grown to 1,600 acres and hosts 340 days of racing activity each year.

Mayhew Set To Defend Sonoma Win: David Mayhew will be making his second K&N Pro Series West start of the year this weekend. Mayhew won at Sonoma last season after leading only four of the 68 laps. In his eight starts at the historic California road course, he’s earned one win, three top fives and four top 10s.

Seven Drivers Aim To Make Their Season Debuts: James Bruncati, Jim Inglebright, Scott Ivie, Tom Klauer, Michael Shawhan, Tim Spurgeon and Brian Wong are all set to make their season debuts in the K&N Pro Series West in the Chevy’s Fresh Mex 200. The most notable is veteran Inglebright. He has earned two top fives and five top 10s in 11 starts at Sonoma. All seven drivers will be looking to earn their first win at Sonoma.

NASCAR Coast to Coast
Each Wednesday at 12 p.m. ET exclusively at MRN.com, hosts Kyle Rickey and Buddy Long update you on all the news from NASCAR Modified, K&N Pro Series East and West Series, along with interviews with the drivers.