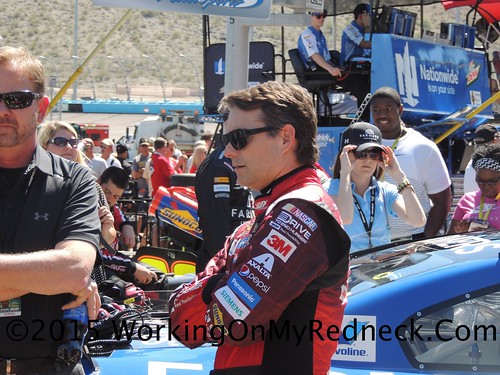 Gordon has experience sitting alongside Ripa. During the Live With Regis and Kelly era, he served as Ripa’s sidekick nine times. (He even did a stint opposite the Reegester in 2001 before Ripa came on board).

He most recently appeared on the show in June 2015, but just as a guest.

Since retiring from professional stock car racing in 2015, the 44-year-old Gordon has transitioned into broadcasting (he currently serves as a Fox NASCAR analyst). Should he snag the Live gig, his career path would closely mirror that of the man he’d be replacing; Strahan, who exited Live last month for a full-time gig at Good Morning America, also segued into broadcasting after retiring from the NFL.

Live is expected to continue pairing Ripa with a parade of guest co-hosts until a final decision is made later this summer. Other names in the permanent co-host mix include former Grinder star Rob Lowe and Ripa’s BFF Anderson Cooper.

Regarding the Gordon buzz, a Live rep tells TVLine, “Lots of rumors out there, but we don’t comment on co-host speculation.” Gordon’s spokesperson, meanwhile, also declined TVLine’s request for comment.

If Gordon is the replacement for Strahan on Live, then what would become of his weekend stint on Fox with Mike Joy and ol DW (Darrell Waltrip)?  Would FOX search out another retired driver, or revert back to giving more on air time to Larry Mac (Larry McReynolds)?

As good as this speculation could be for ol Jeffie, this may present an equal problem for FOX NASCAR!

One Comment on “Could Jeff Gordon Be Kelly Ripa’s Next Co-host?”