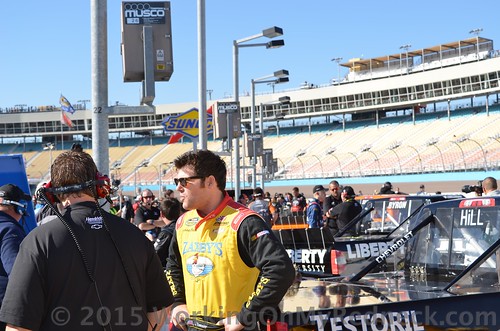 After posting the fastest lap on Thursday during practice for Friday night’s NASCAR Camping World Truck Series Rattlesnake 400 at Texas Motor Speedway, there was plenty of optimism in the Athenian Motorsports and John Wes Townley camp heading into the 167 lap race on the 1.5-mile oval.

Townley rolled off seventh in the Jive Communications/Zaxby’s Chevrolet and quickly surged into sixth. But that would be the highest the Watkinsville, Ga. native would climb on the leaderboard.

After riding just inside the top 10 during the opening segment of the event, Townley dove onto pit road for four new Goodyear tires and Sunoco fuel.

The over-the-wall team quickly realized there was an issue with the right-front of the Silverado that prevent it from rebounding after coming to a stop. The result was the right-front tire changer struggling to remove the old tire since it was too close to the fender well.

That translated into 20 second stops and lost track position each time Townley pitted for four tires.

Despite the mechanical snafu, Townley managed to find speed in his Chevrolet and climb back to seventh with 50 laps remaining.

But while looking for grip and flirting with the high lane in Turn 3, Townley’s Silverado spun around to prompt the final caution of the evening. The spin resulted in four flat-spotted tires and left Townley pinned one lap behind the leaders.

Despite no damage to his truck, the 26-year-old driver was unable to regain the lost lap and was left to settle for a 17th-place finish.

“This has been a frustrating season,” said Townley, who is 19th in the Truck Series driver standings. “We’ve had lots of speed at most races, but we just don’t have the results to show it.

“But the guys on the team and I aren’t going to throw in the towel. We’ll work hard and look to post a great finish at Iowa next week.”

The NASCAR Camping World Truck Series Speediatrics 200 at Iowa Speedway gets the green flag at 8:47 p.m. eastern on Saturday June 18th and will air live on Fox Sports 1.