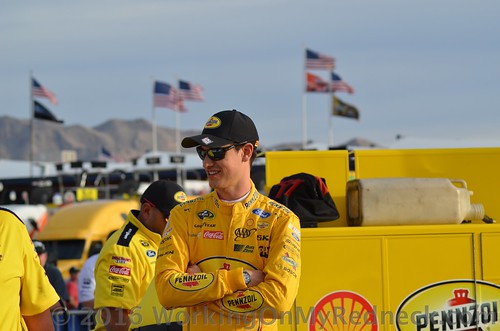 There was one major difference between Joey Logano’s victory in Sunday’s FireKeepers 400 at Michigan International Speedway and his win May 21 in the Sprint All-Star Race at Charlotte. This one counted in the NASCAR Sprint Cup Series standings and punched Logano’s ticket into the Chase.

But it remained abundantly clear that Team Penske already has a handle on the aerodynamic configuration the sanctioning body is considering for 2017.

Logano led 139 of 200 laps at the two-mile track and dominated a succession of restarts, except for one instance on Lap 117 when race runner-up Chase Elliott grabbed the lead from the driver of the No. 22 Ford.

Reasserting his superiority on a Lap 154 restart, Logano held the top spot the rest of the way to win for the first time this season, for the second time at Michigan and for the 15th time in his career. It was the 50th victory for Team Penske since switching to Ford equipment after the 2012 season.

“Everyone did a great job of understanding what this package was going to do,” Logano said in Victory Lane. “They put together a great race car for me. It was a lot of fun racing with Chase there at the end…

“Perfect execution. We’ve been knocking on the door for a win here all season. We got that All-Star win, but it’s nice to get that win and lock ourselves into the Chase.”

Logano had a comfortable lead over Elliott, the Sunoco Rookie of the Year leader, when Denny Hamlin popped his left rear tire on the frontstretch and careened into the inside wall near the entrance to Turn 1. NASCAR called the ninth caution of the afternoon, setting up the final restart with seven laps left.

Logano chose the outside lane, and eventual third-place finisher Larson tried to push Elliott past Logano into the lead, but to no avail. Logano pulled away, maintained an advantage of nearly one second and won the race by .889 seconds over Elliott, who was chagrined despite a career-best finish in the NASCAR Sprint Cup Series.

Elliott’s waterloo actually came at Lap 154, when, as the leader, he missed a shift and allowed Logano to regain the lead.

“You can’t do dumb stuff and win these races,” Elliott said. “Completely my fault. The guys gave me a great car today. This whole NAPA group has been working so hard these past few weeks, and that one was on me.

“Like I said, you can’t do dumb stuff to win these things and I did today.”

Asked to elaborate on what he did wrong, Elliott replied, “Putting it in the correct gear would be a good start.”

The seventh-place result for Stewart was his second-best this season. Stewart missed the first nine events of the year after an offseason back injury.

Notes: Debris on the grille of Kyle Busch’s No. 18 Toyota caused his engine to overheat and erupt in a fireball just past the 50-lap mark. Busch was the first driver out of the race (in 40th place), marking the fourth straight event in which he has finished 30th or worse.

Dale Earnhardt Jr. was the victim of a Lap 62 crash that started when Chris Buescher’s Ford got loose on the bottom of the track and clipped the left rear of Earnhardt’s Chevrolet, which in turn wiped out the No. 47 Chevy of AJ Allmendinger. Earnhardt retired from the race in 39th place…

Larson’s No. 42 Chevrolet failed the laser inspection station (LIS) after the race. NASCAR is taking the car to its research-and-development center in Concord, N.C., for further evaluation. If penalties are warranted, they will be announced in the coming week.

Check out the unofficial results from the FireKeepers Casino 400.